Clashes erupt as Zamboanga City airport reopens, some areas back to normal 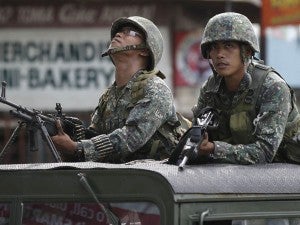 ZAMBOANGA CITY, Philippines – As videoke bars started to come alive and stores opened outside of conflict areas of the city, life seemed to be returning to normal for residents here on Thursday.

The first flight out of the city in 11 days—a Cebu Pacific plane—even flew for Manila amid heavy rains.

But then, gun battles erupted anew on Thursday in Barangay Sta. Barbara, which resulted in the death of a junior officer, said Lt. Col. Ramon Zagala, the military’s spokesperson.

The fresh fire fight pushed some 34,000 more residents to flee to safe ground, with the number of evacuees now placed at more than 114,000 from 80,000 barely two days ago, the Mindanao Human Rights Action Center (Minhrac) said.

Zagala said so far, 13 government troops have died, including the young lieutenant who was killed during clearing operations.

He did not identify the fatality yet, pending notification of the next of kin.

Supt. Ramon Zabala, the city fire marshall, said heavy gun battle and a series of fires also broke out in Rio Hondo. Another fire was reported in Fort Pilar.

“We have received more than a dozen fire calls already since day 1 of the crisis,” he said.

But Zabala would not say yet if the fires were deliberately set or not.

Gov. Mujiv Hataman of the Autonomous Region in Muslim Mindanao said that prior to the heavy exchange of fire on Thursday, 15 MNLF gunmen from Basilan had yielded.

Earlier, 49 suspected MNLF gunmen either yielded or were captured.

Lt. Gen. Rey Ardo, commander of the military’s Western Mindanao Command, said those who surrendered were sent to the headquarters of the Task Force Igsoon in Barangay Sta. Catalina for processing.

Those who surrendered were either from Akbar or Albarka towns in Basilan, according to Hataman.

A list shown to the Philippine Daily Inquirer contained mostly unfamiliar names.  They did not likely lead the fire fight against government troops.

Chief Supt. Felipe Rojas of the Philippine National Police’s directorate for operations, said the 15 gunmen were “forced to surrender due to hunger.”

“They have nothing to eat anymore so they yielded and turned over all their firearms,” he said.

The International Committee of the Red Cross said there has been no respite for civilians yet even as the campaign to defeat the MNLF gunmen continued through Thursday.

The crisis has been turning into a serious humanitarian concern, the aid group said.

“Increasing numbers of people are fleeing their homes amid ongoing clashes in Zamboanga city, on Mindanao Island, generating more humanitarian needs. Together with the Philippine Red Cross, the International Committee of the Red Cross (ICRC) is stepping up its response,” Pascal Mauchle of the ICRC said in a bulletin issued on Thursday.

Mauchle, head of the ICRC’s delegation in the Philippines, said ICRC and the Philippine Red Cross has been working to ensure the evacuees’ access to drinking water, food, medicine and medical attention.

But even if the situation returns to normal and the evacuees have resettled, the “significant” number of civilians killed or injured remains a “clear concern,” according to Mauchle.

“(It) will make it all the harder for normal life to resume,” he said.

Mauchle, on behalf of the ICRC, called anew on both sides “to take the necessary precautions to spare civilians and their property.”

“We hope a positive settlement will soon be found to the situation in Zamboanga, to enable civilians to safely return to their homes and start rebuilding their lives. We stand ready to act as a neutral intermediary to resolve matters of humanitarian concern, if requested to do so. In the meantime, the ICRC remains committed to providing essential aid to people in need,” he added. With a report from Allan Nawal, Inquirer Mindanao