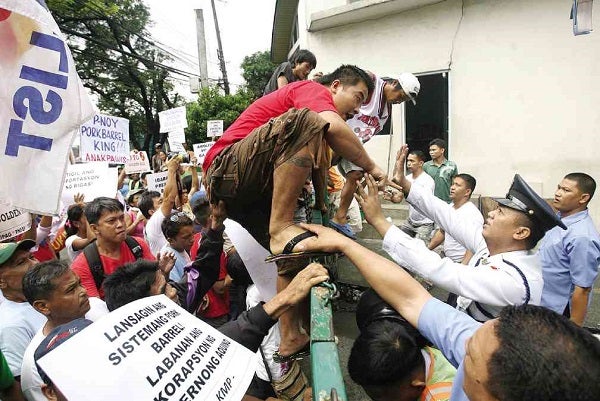 FARMERS angry at the theft of public funds through pork barrel and alleged overpricing of imported rice climb over a metal fence during a recent protest action at the head office of the Department of Agriculture in Quezon City. MARIANNE BERMUDEZ

LUCENA CITY, Philippines—Militant farmers are demanding that the government act on what they said was the artificial shortage of rice as calls for Agriculture Secretary Proceso Alcala started to ring over his department’s alleged failure to meet government targets for rice sufficiency.

Kilusang Magbubukid ng Pilipinas (KMP) said the government is apparently not doing anything to stop the continuing increase in rice prices.

Another militant group, Sanlakas, said it is time for Alcala to quit after it became clear that the Department of Agriculture (DA) could no longer attain its targets for rice sufficiency.

Pointing to proceedings at a House investigation, lawyer Argee Guevarra, a leader of Sanlakas, said the country is at least 2.5 million metric tons short of its 2013 rice production target and 500,000 MT short of rice stock needed for the rest of the year.

The figures were presented by the Bureau of Agricultural Statistic (BAS) during a hearing of the House committees on agriculture and food security, which are investigating increases in rice prices and shortage in supply.

At the hearing, Magdalo Rep. Gary Alejano asked Romeo Recide, assistant agriculture secretary and head of the BAS, if the country would be rice self-sufficient in 2013. “The answer is no,” Recide replied.

Guevarra, who was at the hearing as a resource person, said there was an admission from the BAS, too, that the country needs at least 500,000 MT more of rice for the rest of the year.

Alcala, however, said at the hearing that the amount of palay yet to be harvested until end of 2013 would be enough to meet the government production target of 20 million MT, higher than last year’s 18 million MT.

Guevarra, however, said the BAS was clear about its projection of only 18.45 million MT of harvest by the end of the year, or a shortfall of about 2 million MT.

Guevarra said Alcala has tried to cover up his failings by feeding President Aquino with misleading numbers and by “blaming unnamed groups for the shortcomings of his agency.”

“Heads have rolled for so much less. Alcala should do the honorable thing. He should resign,” Guevarra added.

KMP expressed alarm over reports that rice millers in Intercity, the biggest warehouse and mill of rice producers in Central Luzon, are shutting down due to shortage and high prices of palay from the rice-producing provinces of Pangasinan, Nueva Ecija, Isabela and Cagayan. Delfin T. Mallari Jr., Inquirer Southern Luzon