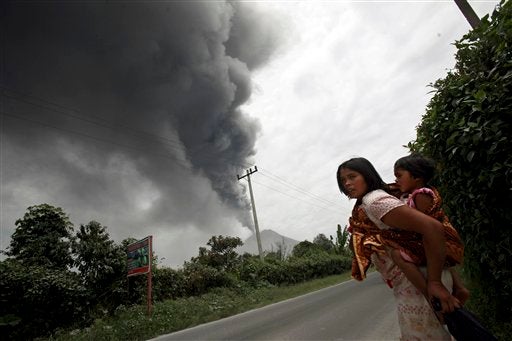 A woman and her daughter flee their home as Mount Sinabung erupts in Karo, North Sumatra, Indonesia on Tuesday. Thousands of people were evacuated from their villages following the eruption of the 2,600-meter volcano Sunday after being dormant for three years, sending thick ash into the sky with small rocks pelting neighboring villages. AP

MEDAN, Indonesia — A volcano in western Indonesia has erupted for the second time this week, forcing some villagers who were just returning home to flee the mountain again.

Local Disaster Mitigation Agency chief Asren Nasution said that Tuesday’s midday eruption spewed volcanic ash and thick smoke up to three kilometers (nearly two miles) into the air. He said there were no immediate reports or damages or injuries.

More than 6,200 people were evacuated from their villages following Sunday’s smaller eruption of the 2,600-meter (8,530-feet) volcano in North Sumatra province.

Mount Sinabung is among 129 active volcanoes in Indonesia, the world’s largest archipelago nation which is prone to seismic upheaval due to its location on the Pacific “Ring of Fire,” an arc of volcanos and fault lines encircling the Pacific Basin.