MANILA, Philippines–As it turned out, the police chief of Zamboanga City who was earlier said to have been seized by members of the Moro National Liberation Front was not really abducted, but only negotiated for the surrender of several guerrillas, a Philippine National Police official said. 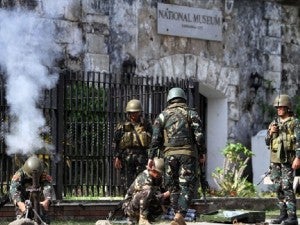 Philippine Army soldiers fire a 60mm mortar towards the position of MNLF loyal to Misuari where they camp out with their hostages in Barangay Sta. Barbara in Zamboanga City. EDWIN BACASMAS

Senior Superintendent Theodore Sindac, PNP-Public Information Office chief, earlier said Malayo was abducted “at gun point” in Barangay (village) Mampang around 11 a.m. while he was negotiating for the release of civilian hostages.

In a separate advisory, Interior Secretary Mar Roxas II said “I am pleased to inform you that Zambo[anga] City director, Senior Superintendent Chiquito Malayo has successfully convinced . . . MNLF fighters to come into the fold of the law.”

Roxas, however, said the number of rebels who surrendered was only 23.