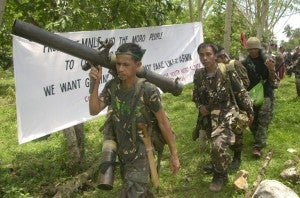 The Philippine Daily Inquirer team in Mindanao saw Malayo aboard a mini-bus, and he was with the MNLF surrenderees.

Malayo waved and smiled at the Inquirer team as the mini-bus passed by.

“[Crisis management committee] confirms the release of Zamboanga police chief Malayo and the surrender of some MNLF members,” it said.

As it turned out, the police chief of Zamboanga City was not really abducted but only negotiated for the surrender of several rebel members.

Senior Superintendent Theodore Sindac, PNP-Public Information Office chief, earlier said Malayo was abducted “at gun point” in Barangay (village) Mampang around 11 a.m. while he was negotiating for the release of civilian hostages.

In a separate advisory, Interior Secretary Mar Roxas II said “I am pleased to inform you that Zambo[anga] City director, Senior Superintendent Chiquito Malayo has successfully convinced…MNLF fighters to come into the fold of the law.”

Roxas, however, said the number of rebels who surrendered was only 23.

“While trying to convince them, he was taken into custody or held hostage but he kept on convincing them until he succeeded,” Roxas told reporters.

The rebels said they had come from a nearby island to join a peaceful protest by their group in Zamboanga but withdrew after firefights erupted between government troops and their comrades, Roxas said, adding police would investigate their claims.

“The important thing here is he (Malayo) was able to enact the surrender,” Zagala said.

The surrender of about 20 rebels comes as government troops intensify an offensive to end the standoff that began Sept. 9 when the troops foiled a suspected plan by a larger group of rebels to take control of Zamboanga, a major port of nearly 1 million people about 860 kilometers (540 miles) south of Manila.

The military says it has recaptured 70 percent of the coastal areas occupied by the rebels and rescued more than 100 hostages.

About 64 hostages were freed or escaped during military operations early Tuesday, followed by another 14 who walked to freedom in separate batches. That brought to 116 the number of those rescued in the last 18 hours, Zagala said.

He said more than 100 Moro National Liberation Front rebels were still holding hostages in the remaining pockets they control in five coastal villages in Zamboanga.

Nearly 82,000 residents have fled the fighting into several emergency shelters, including the city’s main sports complex.

President Benigno Aquino III has been in Zamboanga since Friday to oversee the handling of the worst security crisis his administration has faced since he came to power in 2010.

The Moro insurgents, led by Nur Misuari, signed a peace deal in 1996, but the guerrillas did not lay down their arms and later accused the government of reneging on a promise to develop long-neglected Muslim regions in the south of the predominantly Roman Catholic nation.

The rebels have become increasingly restive in recent months as they’ve been overshadowed by a rival rebel group that engaged Aquino’s government in peace talks brokered by Malaysia. Thiae talks have steadily progressed toward a new and potentially larger autonomy deal for minority Muslims in the south. With a report from Inquirer Mindanao and Associated Press