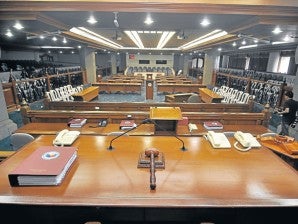 MANILA, Philippines – Members of the media covering the Senate on Tuesday were reminded to refrain from conducting interviews while the chamber is in plenary session.

In an advisory sent to reporters, the Senate’s Public Relations  and Information Bureau (PRIB) reiterated that “media  interviews  are not allowed  on the floor when  a plenary session  is in progress.”

“The Office of the Sergeant-at-Arms is strictly enforcing the observance of plenary hall rules. Similar violation will cause the automatic revocation of reporters’ or their media outfits’ accreditation in the Senate roster,” said the advisory issued by PRIB head Raymundo Corro.

It specifically noted Monday’s  incident where  some members of the media  interviewed Senator Ramon “Bong” Revilla Jr. while the Senate was in session.

“The concerned reporters were leaning over the railings of the left gallery and called Senator Revilla on the sidelines for an interview,” said the advisory.

“Please be reminded that media interviews are not allowed on the floor when a plenary session is in progress. As a rule, absolute silence in the plenary hall must be observed during sessions so as not to distract the proceedings,” it further said.

The PRIB said media practitioners may just request interviews with senators through their media relations officers or may use the briefing room located near the plenary hall on the second floor for individual or group interviews.