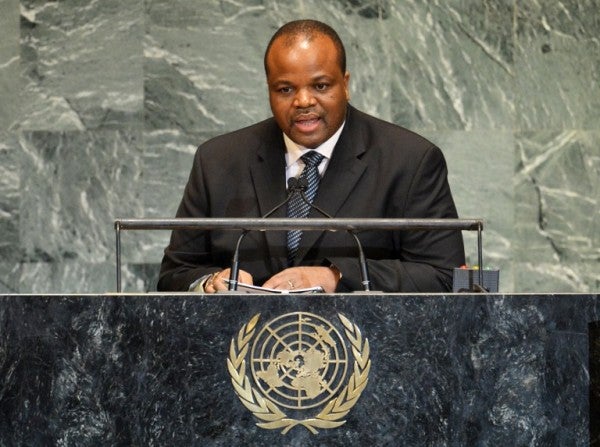 A file photo taken on September 26, 2012 shows King Mswati III of Swaziland speaking during the 67th session of the United Nations General Assembly at the UN headquarters in New York. Swaziland’s King Mswati III has chosen an 18-year-old beauty pageant contestant as his 14th wife, a palace spokesman said on September 17, 2013, days before a much-criticized parliamentary vote. AFP

“I can confirm that the king has introduced to the nation a new liphovela (royal fiancee),” said Ludzidzini palace governor Timothy Mtetwa.

She wore red feathers on her head — a sign of royalty.

The young woman graduated from Mbabane’s St. Francis High School last year and is a finalist in the Miss Cultural Heritage beauty pageant. The winner will be announced on September 28.

The king has come under fire for his household’s lavish lifestyle while the tiny mountain kingdom’s 1.2 million people struggle to make a living.

Mswati reportedly has a personal fortune of around $200 million (152 million euros) and the UN estimates that 70 percent of his 1.2 million subjects live below the poverty line.

He has steadfastly resisted reforms.

The new engagement was announced at a festival which also counted regional delegates who will observe parliamentary elections on Friday.

Critics have slammed the polls as a sham, partly because political parties are banned and candidates are handpicked by traditional leaders.

The weekend’s celebrations were a smaller repeat of last month’s official annual Reed Dance, where young virgins from across the kingdom gather and dance for the king.

“It just happened that the international community was there to witness the event,” said Mtetwa.

The wedding only takes place once the fiancee falls pregnant. Dlamini will then become Mswati’s 14th wife.

The monarch’s colorful private life is off-limits in local media, but has drawn a lot of international interest.

Three wives left the household in recent years. The latest, Queen LaGija, fled the palace in 2012 claiming years of physical and emotional abuse.

Another queen, LaDube, was reportedly abused after she was caught in bed with the justice minister, a close friend of the king.

Mswati had kidnapped and married the queen when she was 16 in 2005.