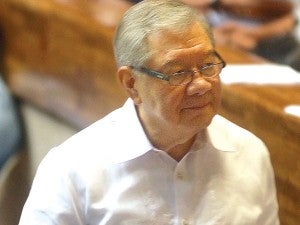 MANILA, Philippines — Speaker Feliciano Belmonte Jr. said on Tuesday the freedom of information bill would be put to a vote in the 16th congress, especially after President Aquino certified it as urgent.

Belmonte painted a more optimistic future for the FOI bill on Tuesday, after it stalled in the last two congresses. The measure will be taken up after Malacañang decided to include the transparency and accountability measure in the list of bills it considers urgent and will present to lawmakers during the Legislative-Executive Development Advisory Council, according to Belmonte.

“It really helps that the Palace itself says okay [to the bill], so that augurs well for the future of that bill in the 16th congress,” Belmonte told reporters on Tuesday.

He also answered in the affirmative when asked if this would guarantee that the bill would be a put to a vote.

He disclosed that he had asked several people to study the different versions of the FOI bill filed in Congress and to provide feedback on the measures.

“In other words, we’re not ignoring it,” he said.

The FOI bill failed to hurdle the 15th Congress, the first congress convened under the Aquino administration. The bill was approved at the committee level, but was not deliberated on and put to a vote in the plenary.

Advocates of the bill, which seeks to lift the shroud of secrecy on government dealings and transactions, had repeatedly called on the President to certify it as urgent, but he did not do so.

Calls to approve the measure intensified following the disclosure of an alleged scheme to channel lawmakers’ pork barrel funds totalling P10 billion to their and their cohorts’ pockets.

According to FOI proponents, having such a transparency measure would prevent similar schemes from taking place.

Meanwhile, the FOI Youth Initiative rejoiced at the reported inclusion of the FOI bill in the list of priority measures.

“Our hope in the struggle for transparency and accountability has been renewed. Our public officials should now realize the dire need for this measure in the wake of all issues of government corruption, especially the PDAF scam,” FYI convenor Allan Pangilinan said in a statement.