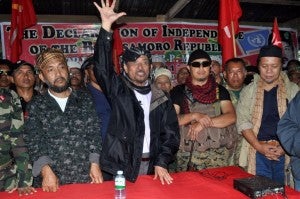 Moro National Liberation Front (MNLF) leader Nur Misuari (C) addresses his armed followers in one of their camps in Indanan, Sulu, on the southern island of Mindanao. AFP FILE PHOTO

MANILA, Philippines – The Moro National Liberation Front on Tuesday confirmed they were holding as “prisoners of war” the Zamboanga City police chief and his two security escorts in an embarrassing setback for the government that has been trying to rescue hundreds of villagers being held as hostages by the guerrillas.

Fontanilla claimed Malayo was leading a clearing operation in Sta. Catalina village when he was seized by rebels. He said MNLF fighters were “positioning” because government forces allegedly burned parts of Sta. Barbara and Sta. Catalina villages to flush them out of their jungle hideouts.

But the Philippine Information Agency Western Mindanao said Malayo was being held hostage at the “mangrove area of Brgy. (village) Mampang, Zamboanga City while he was negotiating with the group of [MNLF Commander] Habier Malik.”

The PIA said the Philippine National Police reported ongoing rescue operations for Malayo and his companions.

Acting public affairs office chief of the Armed Forces of the Philippines Lieutenant Colonel Harold Cabunoc confirmed that Malayo was abducted by the followers of Nur Misuari.

“We have received informal reports through a text message that Police Senior Superintendent Chiquito Malayo was abducted by followers of Misuari,” Cabunoc told INQUIRER.net.

Sixty-one people have died and 70,000 residents displaced since the standoff in  Zamboanga City began more than a week ago, when hundreds of MNLF gunmen sought to plant an independence flag.

Hundreds of other civilians had remained trapped as the rebels sought shelter from a military assault in Muslim neighbourhoods of the city, with some of the residents used as hostages or human shields.

After a relentless military offensive involving helicopter rocket attacks, which began Friday and saw the rebels lose much of the territory they had occupied, 149 people escaped on Monday night and Tuesday morning, authorities said.

The mood in Zamboanga City was mixed with Mayor Maria Isabelle “Beng” Climaco-Salazar, through the local government’s Twitter account, lamenting, “While we rejoice the rescue of 149 hostages, we are deeply saddened that Col. Chiquito Malayo is in the custody of the MNLF.”

Fontanilla said the group has been transferred to a “safe place to also ensure their security and rights as guaranteed by the Geneva Convention and the International Humanitarian Law.”

The MNLF has been calling for a political resolution to the conflict in Zamboanga City through the help of the Organization of Islamic Cooperation and the United Nations.

The MNLF signed a peace treaty in 1996 that granted limited self-rule to the south’s Muslim minority, and has since largely participated in the country’s political process rather than foment violence.

But 71-year-old MNLF founder Nur Misuari has been angered by a planned peace deal between the Moro Islamic Liberation Front, a rival group with 12,000 gunmen, as he believes it would sideline his organisation.

He deployed his gunmen to Zamboanga to plant an independence flag, which security analysts said was intended to show the MNLF could prove a major threat if it continued to feel ignored.

President Benigno Aquino has described the autonomous region established under the 1996 pact with the MNLF as a “failed experiment”, largely because the southern Philippines has continued to endure dire poverty and corruption.

Under the envisaged new peace deal, a new autonomous region would replace the MNLF-brokered one.