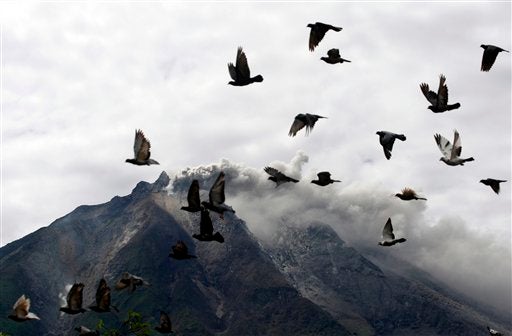 FLEEING BIRDS Pigeons fly by as Mount Sinabung spews volcanic materials following its eruption in Karo, North Sumatra, Indonesia on Sunday. Thousands of people have been evacuated from their homes after the volcano erupted early Sunday. AP

MEDAN, Indonesia — Nearly 6,000 people were evacuated from their villages following the eruption of Mount Sinabung in western Indonesia, an official said Monday.

The 2,600-meter (8,530-feet) volcano in North Sumatra province erupted early Sunday after being dormant for three years, sending thick ash into the sky with small rocks pelting neighboring villages, said National Disaster Mitigation Agency spokesman Sutopo Purwo Nugroho. He said almost 6,000 people have been evacuated and were being sheltered in seven locations. No injuries or damage was reported.

Most of the displaced were from six villages within 3 kilometers of the mountain in Karo district, Nugroho said.

Bambang Ervan, spokesman of the Transportation Ministry, said Monday that the eruption delayed six flights at Kualanamu airport in the provincial capital of Medan on Sunday, but operations returned to normal Monday.

Mount Sinabung’s last eruption in August 2010 killed two people and forced some 30,000 people to flee. It caught many scientists off guard because they had failed to monitor the volcano, which had remained quiet for four centuries.

There are more than 129 active volcanoes in Indonesia, the world’s largest archipelago nation. It is prone to seismic upheaval due to its location on the so-called “Ring of Fire” — a series of fault lines stretching from the Western Hemisphere through Japan and Southeast Asia.