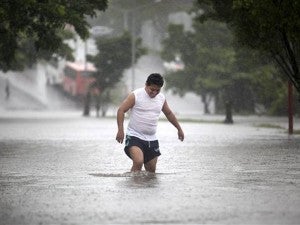 A man walks through a flooded street during heavy rains caused by Tropical Storm Ingrid in the Gulf port city of Veracruz, Mexico, Friday Sept. 13., 2013. Mexican authorities rushed to evacuate neighborhoods located near riverbanks in eight Veracruz townships as Ingrid lashed the coast with heavy rains, threatening more damage in a state where landslides and flooding have killed dozens of people in recent weeks. AP

XALAPA, Mexico — Ingrid became the second hurricane of the Atlantic storm season off Mexico on Saturday, while Tropical Storm Manuel threatened to cause flash floods and mudslides on the opposite side of the country.

The U.S. National Hurricane Center in Miami said that if Ingrid stays on the forecast track, it’s likely to reach the coast of Mexico on Monday.

The government of the Gulf Coast state of Veracruz began evacuating coastal residents Friday night, and local civil protection authorities said that more than 5,300 people have been moved to safer ground. Of those, about 3,500 people are being housed in official shelters with the rest staying with family and friends. There were no immediate reports of injuries blamed on the storm.

More than 1,000 homes in Veracruz state have been affected by the storm to varying degrees, and 20 highways and 12 bridges have suffered damages, according to the state’s civil protection authority.

A bridge collapsed near the northern Veracruz city of Misantla Friday, cutting off the area from the state capital. Thirteen people died when a landslide buried their homes in heavy rains spawned by Tropical Depression Fernand on Monday.

Off Mexico’s Pacific coast, Tropical Storm Manuel was moving with maximum sustained winds of 50 mph (85 kph). It was 105 miles (170 kilometers) off the city of Lazaro Cardenas and 215 miles (345 kilometers) southeast of Manzanillo. A tropical storm warning is in effect from Acapulco to Manzanillo.

Manuel is expected to produce 10 to 15 inches of rain over parts of the Mexican states of Oaxaca and Guerrero, and life-threatening flash floods and mudslides are likely.

Elsewhere, the remnants of Tropical Storm Humberto were swirling in the Atlantic, far from land. It was expected to regenerate in a couple of days, according to the Hurricane Center.