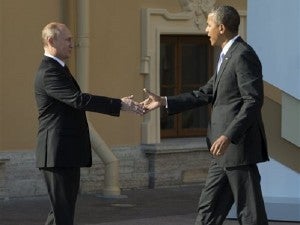 President Barack Obama reaches to shakes hands with Russia’s President Vladimir Putin during arrivals for the G-20 summit at the Konstantin Palace in St. Petersburg, Russia on Thursday, Sept. 5, 2013. AP

WASHINGTON — President Barack Obama welcomed an agreement Saturday to secure and destroy Syria’s chemical weapons stockpile as an “important, concrete step” toward the ultimate goal of eliminating them but warned that the U.S. remains prepared to act if the attempt at a diplomatic solution fails.

Obama said the deal between the U.S. and Russia offers the chance to destroy weapons the U.S. and more than 30 governments maintain were used by President Bashar Assad to kill more than 1,400 Syrians during an attack last month in the suburbs of the capital of Damascus.

Assad has blamed the use of chemical weapons on rebels who have been fighting for more than two years to unseat him.

“I welcome the progress made between the United States and Russia through our talks in Geneva, which represents an important, concrete step toward the goal of moving Syria’s chemical weapons under international control so that they may ultimately be destroyed,” Obama said in a statement released soon after he arrived at Andrews Air Force Base in the Maryland suburbs of Washington for his weekly golf game.

“This framework provides the opportunity for the elimination of Syrian chemical weapons in a transparent, expeditious and verifiable manner, which could end the threat these weapons pose not only to the Syrian people but to the region and the world,” Obama said.

Obama threatened military strikes against Syria in response to the Aug. 21 attack, saying the use of chemical weapons anywhere must not go unchecked. But in an unexpected reversal, he put off ordering a strike to seek backing from Congress, but lawmakers in both political parties overwhelmingly opposed the military option.

After Syria agreed to a surprise Russian proposal to put its chemical weapons under international control, Obama asked Congress to delay a vote to allow time for tense negotiations between Secretary of State John Kerry and Russian Foreign Minister Sergei Lavrov to “bear fruit.”

Obama said the international community expects Syria to live up to its public commitments to hand over its chemical weapons stockpile.

Cautioning that more work remains despite the “important progress” the deal represents, he said the U.S. will continue working with Russia, Britain, France, the United Nations and others to “ensure that this process is verifiable, and that there are consequences should the Assad regime not comply with the framework.”

“And, if diplomacy fails, the United States remains prepared to act,” Obama warned.

Before leaving the White House, national security adviser Susan Rice briefed Obama on the talks, the White House said. Obama also received updates by telephone from U.N. Ambassador Samantha Power and Kerry. Obama said he thanked Kerry “for his tireless and effective efforts on behalf of our nation.”

Power will lead follow-up negotiations at the U.N. Security Council.

“The use of chemical weapons anywhere in the world is an affront to human dignity and a threat to the security of people everywhere,” Obama said in the statement. “We have a duty to preserve a world free from the fear of chemical weapons for our children. Today marks an important step towards achieving this goal.”

At Andrews Air Force Base, Obama teed off with sportscasters Tony Kornheiser and Michael Wilbon, hosts of ESPN’s “Pardon the Interruption.” A White House aide completed the foursome.

Read Next
Analysis: Russia wants seat back at Mideast table
EDITORS' PICK
Do all the things you do, faster
Motorcycles, smartphones, and cash prizes up for grabs in TNT’s ‘Tuloy Ang Saya’ Raffle in Mindanao
House energy committee chair Arroyo bats for cheap electricity
NCR at increased COVID risk again
New PS-DBM director says DepEd laptop MOA ‘not legal’
House okays budget; ways to go in Senate
MOST READ
Shopee PH gets flak for getting Toni Gonzaga
Robredo’s tarpaulin portrait at Palace just a ‘placeholder’
Robredo supporter tackles elephant in room: No massive fraud in 2022 polls, surveys were just right
DepEd: We are in a crisis situation in education sector
Don't miss out on the latest news and information.