2 killed in ambush by suspected tribesmen opposed to mining 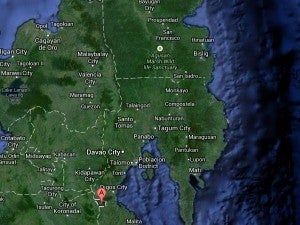 Senior Superintendent Ronaldo Llanera, Davao del Sur police director, said Corporal Ritchie Maravilla, 38, commander of the Kiamo Patrol Base, and militiaman Enrique Tiogangco  were walking toward their camp from an errand when they were fired upon by armed men around 8 a.m.

“They were injured and were rushed by their companions to the Gregorio Matas District Hospital in Poblacion, Kiblawan, but the attending physician declared them dead upon arrival,” Llanera said.

Government officials, led by Davao del Sur Governor Claude Bautista, said the ambush could be part of the “pangayaw” or vendetta by B’laan tribesmen following last month’s killing of anti-mining tribal leader Datu Anting Freay, 60, and his son, Victor, 16, in a military operation, also in Kimlawis.

In October last year, members of the military-led Task Force Kitaco, who were deployed to secure Sagittarius Mines Inc., were also blamed for the death of Capio’s wife and two children.