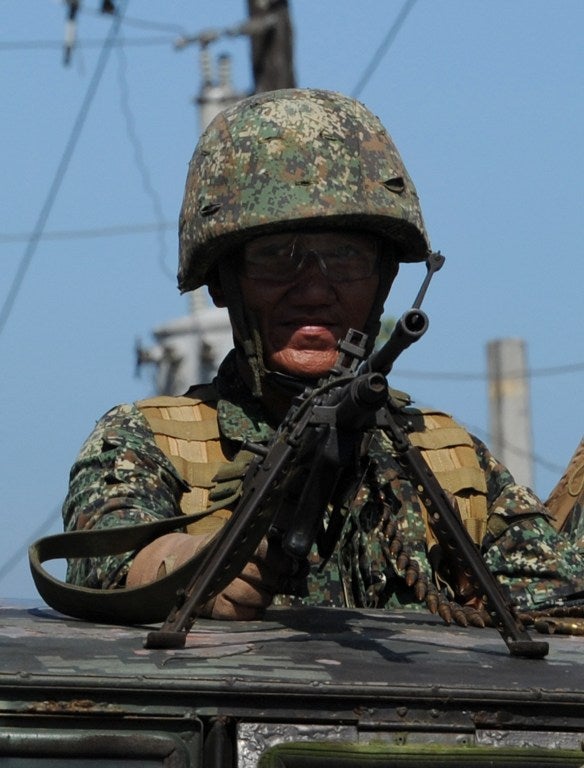 A Philippine soldier mans a machine gun mounted on a military truck as they patrol a neighbourhood near the area where Muslim rebels are holed up in Zamboanga City in southern island of Mindanao on September 13, 2013, as the stand-off enter its fifth day. Philippine President Benigno Aquino September 13, visited the southern city of Zamboanga where government troops are battling followers of a Muslim rebel leader opposed to peace talks. AFP/TED ALJIBE

MANILA, Philippines—A military spokesman said Saturday no directive had been given to the Armed Forces of the Philippines for a ceasefire in Zamboanga and government troops were continuing with the “calibrated offensive” ordered by President Benigno Aquino against a faction of Moro National Liberation Front (MNLF) loyal to founding chairman Nur Misuari.

“We haven’t received any orders yet [about a ceasefire]. Because of the mortar attacks and the burning of the houses by the MNLF, the AFP did a calibrated offensive operation against the MNLF to stop them from endangering the lives of the civilians,” Armed Forces spokesman Lieutenant Colonel Ramon Zagala told the Inquirer by phone.

Zagala said the “calibrated operations” had the approval of Aquino, who spent the night in Zamboanga City.

Zagala reiterated what Aquino said on Friday that the primary concern of the government amid the security crisis was the safety of civilians.

By 11 a.m. Saturday, the President and Defense Secretary Voltaire Gazmin were visiting the evacuation center at the Zamboanga City Sports Complex.

On Friday night, Vice President Jejomar Binay announced that a ceasefire between the military and the MNLF would take effect at midnight.

Binay said he had spoken to both Gazmin and Misuari about the ceasefire and that the men would lay down the terms of the truce.

An Inquirer source said Binay was on his way to Zamboanga City Saturday morning.

Read Next
Aquino in charge of handling Zamboanga crisis, says mayor
EDITORS' PICK
Metro Manila to remain under COVID Alert Level 2 until December 15
Legarda: Ending Violence Against Women, a cause for all
A delightful blessing!
Duterte open to making jabs mandatory; Cabinet mulls ‘pressuring’ the unvaccinated
IATF tightens border control, suspends entry of fully vaxxed nationals from ‘green’ countries
Villar Group gears up for AllValue Shopping Party on Dec. 3; around P 1-million promos and discounts up for grabs
MOST READ
Quiboloy warns of ‘much worse than Omicron virus’ if his ‘persecution’ is not stopped
Bongbong Marcos’ conviction in tax case not a crime involving moral turpitude — lawyer
Marcoleta defends pol ads on ABS-CBN
IATF tightens border control, suspends entry of fully vaxxed travelers from ‘green’ countries
Don't miss out on the latest news and information.