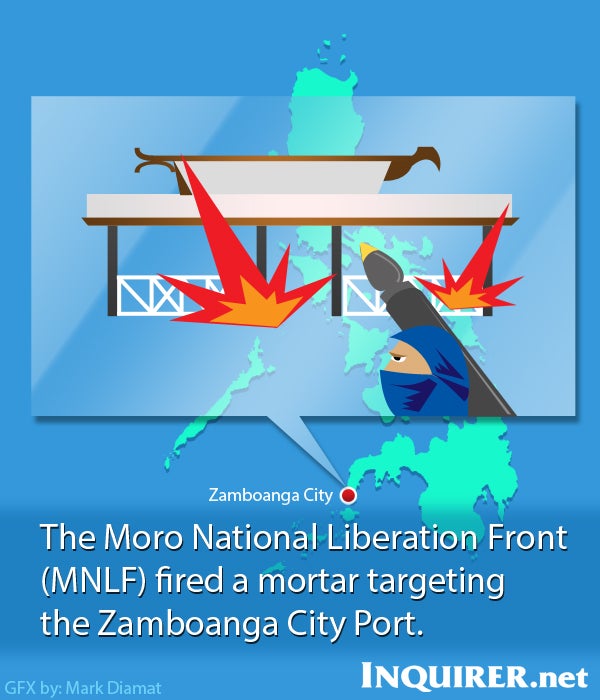 Citing a report from the Coast Guard station in Zamboanga City, Coast Guard spokesman Cmdr. Armand Balilo said no one was injured in the mortar attack.

PCG District Commander Leo Laroya said two mortar rounds were heard some 100 meters away from the PCG headquarters in Zamboanga.

Quoting Commodore Leo Laroya, the PCG-Zamboanga district chief, Balilo said “an undisclosed number of vessels docked at the side of the pier where the mortar rounds landed were promptly advised to transfer their berths.”

“From the Coast Guard station, gunfire was heard coming from the direction of Barangay Paseo,” he said

The blasts happened shortly after authorities announced the release of up to six hostages by MNLF members who have been on standoff with government troops since Monday.

Meanwhile, four PCG vessels have joined their counterparts from the Navy in a sea blockade to prevent MNLF fighters from entering or leaving Zamboanga City.

“We have alerted two more Coast Guard ships based in Cebu. They are awaiting orders to proceed to Zamboanga City,” Balilo,  who heads the PCG’s public affairs office, told the Inquirer.

MNLF frees up to six hostages–authorities