MANILA, Philippines—At least six people have been reported killed while more than 200 others were being held hostage as members of the Moro National Liberation Front attacked several coastal villages in Zamboanga City on Monday.

“Since the start of the crisis at around 4:30 a.m. today (Monday), the Zamboanga City Police Office reported that six people had been killed —one policeman,  one navy man and four civilians–while 24 others had been wounded in the course of the encounter between government troops and the rebels. More casualties were reported on the enemy side,” Zamboanga City Mayor Isabelle Climaco-Salazar said in a statement.

Salazar said 20 of the hostages are in Barangay (village) Sta. Catalina, while over 200 were being held captive in Barangay Kasanyangan.

“We are in close coordination with our police and military authorities and everything is being done to solve the crisis the soonest possible time with minimal damage to lives and properties,” she said.

Aside from Sta. Catalina and Kasanyangan, the other villages affected by the MNLF attack were Sta. Barbara, Talon-Talon, and Mampang.

Airports and seaports in Zamboanga City were closed for precautionary measures. Work and classes in all levels were also cancelled.

There were also about 1,500 persons sheltered in different evacuation centers as of noon Monday, the reports said.

“The City Health Office in cooperation with private hospitals is setting up an emergency hospital at the grandstand where all victims will be directed. Ambulances from public and private hospitals will be stationed in the area,” Salazar said.

Salazar also appealed to the media not to sensationalize or leak sensitive information as to not jeopardize the operations of authorities.

Interior Secretary Manuel Roxas II and Defense Secretary Voltaire Gazmin have been directed by President Aquino to fly to Zamboanga to help address the situation.

“I am in touch with President Aquino and the Executive Department and they are monitoring and helping us resolve this concern,” Salazar also said.

Presidential spokesman Edwin Lacierda said the city government has appealed to the national government for help and President Benigno Aquino III is being briefed and receiving updates on the situation.

“We condemn the attack on Zamboanga City in the strongest possible terms,” he said. 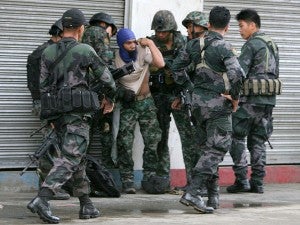 The attack came as the government and the Moro Islamic Liberation Front prepared to resume talks aimed at crafting a political settlement to be signed before Aquino leaves office in 2016.

Rommel Banlaoi, executive director of the Manila security think-tank Philippine Institute for Peace, Violence, and Terrorism Research, which has extensively covered the conflict, said the action was likely designed to sabotage the peace talks.

He added: “The fear now is Misuari could create one united front along with other threat groups against the Philippines.”

Misuari had made a renewed call last month for an independent Islamic state in the southern Philippines.

“To the Philippine government, I think our message is already quite clear — that we don’t like to be part of the Philippines anymore,” Misuari said in his message last month, a copy of which was obtained by AFP.

He called on his forces to “surround and secure all military, police and all other installations, airports, seaports and all other vital government and private institutions”.

The MNLF signed a peace deal in 1996, dropping its bid for independence and settling for autonomy, although its followers had not totally disarmed.

The government later said the agreement was a “failed experiment” with many areas remaining in deep poverty.

It is not the first time Misuari has attacked Zamboanga.

In 2001, he and his followers took dozens of hostages and left many more dead in Zamboanga and in nearby Jolo island, his home base.

The MNLF later freed all the hostages after several days, in exchange for free passage out of the city as Misuari fled to Malaysia, where he was arrested and deported.

He was held in a police camp near Manila until 2008, when the government dropped all charges against him. With reports from Agence France Presse, Associated Press