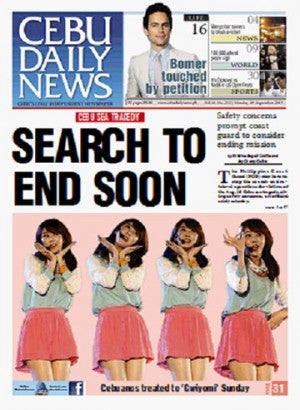 The Philippine Coast Guard (PCG) may have to stop the search and retrieval operations for victims of the Aug. 16 Cebu sea tragedy, citing safety concerns, an official said yesterday.

PCG spokesman Cdr. Armand Balilo said the lives of divers may be endangered if they continue the search operations for the missing passengers of the MV St. Thomas Aquinas.

In an interview with Radyo Inquirer, he said the waters where the ferry sank is murky and littered with debris. Nevertheless, he said the divers will still have to evaluate the situation.

The ship, owned by 2GO Travel, sank in the waters of Lauis Ledge near Talisay City on Aug. 16 after colliding with Sulpicio Express Siete.

As of yesterday, 114 bodies were recovered while 23 are still missing.

Balilo also said the Special Board of Marine Inquiry will soon release its findings on the sea mishap.

In a separate interview, Commo. William Melad, commander of the PCG Central Visayas district, clarified that they have yet to officially call off the search and retrieval operations, but they will be assessing the situation with the divers.

Melad told Cebu Daily News they will make the call should the divers’ assessment lead to the consensus that current conditions in the wreckage site pose valid safety concerns.

No additional bodies were brought to the surface when coast guard and navy divers made diving sorties yesterday morning.

Around 30 divers including support divers and volunteers from the PCG Auxiliary, continue to participate in the search and recovery operations.

A relative of the missing passengers of the ill-fated ferry appealed to the coast guard not to give up on the search.

(I hope they’d understand. I have three relatives who remain unaccounted for. I hope they will continue the search.)

Libanon of Valenzuela City in Manila was in Cebu recently to check on the developments of the ongoing search. His wife and two children were among the missing passengers of the Aquinas.

He said he is hopeful that his family members are among the unidentified cadavers and body parts kept in the Cosmopolitan Funeral Homes. Forensic experts have been conducting DNA tests on the cadavers to identify them and have the remains handed over to the next of kin.

(We are just banking on the DNA testing. We were told that the results would be released after six months. I would have wanted to have it processed as soon as possible.)

Meanwhile, the specialized ship tapped by Malayan Towage to siphon off the oil and fuel from the sunken Aquinas arrived in Cebu last Saturday.

Commo. Melad said the ship is now positioned above the locale where the Aquinas sank and is preparing to start its operation this week.

Melad said that if the weather is favorable, the salvage team will start its operations either today or tomorrow. /Kristine Angeli Sabillo and Joy Cherry Quito