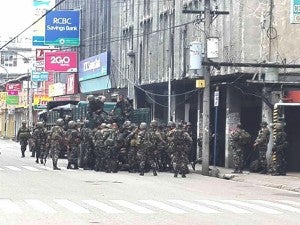 In this handout photo released by the Philippine Information Agency Region IX shows Philippine military troops come down from a military truck as they secure an area in Zamboanga city, southern Philippines, Monday Sept. 9, 2013. AP

MANILA, Philippines. — Eighty- seven civilians remain hostage inside a village in Zamboanga City where suspected members of the Moro National Liberation Front have been on standoff with government troops since early Monday, police said Tuesday.

The Philippine National Police said that as of posting time, the hostages remained inside Barangay (village) Sta. Catalina throughout the night although there was no information on their condition.

The PNP said the civilians were only “stranded” inside the village, but later confirmed that they have been taken as hostages.

Despite this, PNP said the police and military were on top of the situation.

“The paramount concern in the decision-making of our commanders is the safety of our civilians, given the fact that the area where they are in right now is populated,” PNP said.

Meanwhile, Zamboanga City Mayor Beng Climaco said that as of 3 a.m. some 30 armed MNLF rebels coming from Mampang were seen headed towards Sta. Catalina with civilians as “human shields.”

Climaco said the movement was to support their comrades. However, they were blocked by police and TFZ personnel manning checkpoints in the area.

The number of fatalities, she said, remained at 4, and the number of wounded victims at 14.

“Authorities are undertaking steps to resolve the crisis but would not divulge details of the operation,” she said.

She also called on to the public to refrain from spreading unverified text messages.

“An urgent appeal is also aired to media anew to refrain from airing sensitive information to prevent panic and confusion. We thank the media for their extensive coverage of the incident but we have to speak with one voice as our common goal is the safety and protection of the Zamboangueno community,” Climaco said.

The mayor also said the imposition of curfew from 8 p.m. Monday to 5 a.m. Tuesday has been “ smoothly implemented.”

No one was apprehended, Climaco said.

“Please keep safe by staying in your homes, limit movements outside, as we allow our authorities to do their role in ending the conflict. Let us all pray for the safety of our people and our beloved Zamboanga City. Vaya con Dios!” Climaco said.

MNLF in standoff with gov’t troops