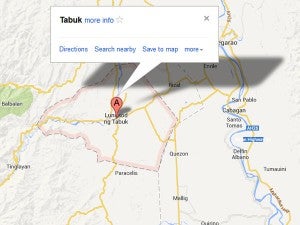 CAMP MELCHOR DE LA CRUZ, Isabela—Two Philippine Army soldiers were killed and three others were wounded in a clash on Friday with suspected communist rebels in Tabuk City in Kalinga province.

Killed in the clash were Pfc. Rey Raagas and Cpl. Dominador Concordia. Wounded were 2Lt. Czar Carsido, Pfc. Marnel Langnga and Pfc. Kennedy Sallaya, who were treated at the 5th ID military hospital in Gamu town, she said.

The military and the police have been waging combat operations against New People’s Army rebels on two fronts since Thursday when the Cordillera police battled the rebels in Mt. Province.

Two police officers were wounded in an encounter at the boundary of Sagada and Bontoc towns in Mt. Province.

On Friday, Sagada suspended tours to its popular tourist destinations for the weekend after the Cordillera police launched air strikes on a communist rebel camp in the area.

Police attack helicopters dropped bombs on Barangay Aguid in Sagada at 8 a.m. Friday, the second day of fighting between the police and the NPA near Aguid and Barangay Mainit in Bontoc.

She said gunfire could be heard for miles and people had been seeing helicopters hovering over the area since Thursday afternoon.

Robert Pangod, Sagada municipal disaster risk reduction and management officer, said the local government was notified that the helicopters unloaded four bombs, but no one was reported hurt or killed.

Pangod said the government had suspended all tours to the Bomod-ok Falls in Sagada since Thursday because of the firefight.

According to the Bangaan Fidelisan Tanulong Aguid Madungo Guides Association, tour operators mount five to eight tours to the Bomod-ok Falls every day. A tour is composed of up to 10 tourists, each of them paying P500.

Pangod said Sagada residents were also prohibited from tending to their “uma” (swidden farms). He said farmers in the area stopped work during military operations to avoid being caught in the crossfire or being mistaken for rebel combatants.