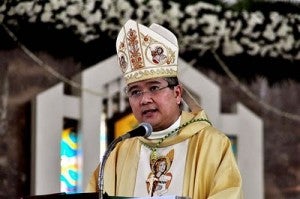 MANILA, Philippines—The incoming head of the Catholic Bishops Conference of the Philippines (CBCP) urged his flock to rekindle their faith on the occasion of the 85th birth anniversary of the late Manila Archbishop Jaime Cardinal Sin on Saturday.

Lingayen-Dagupan Archbishop Socrates Villegas, who had served as Sin’s private secretary, likened his former boss to the leader of the world’s Catholics today.

He said the warmth and candor of Pope Francis reminded him of the humor and courage of Sin, who was instrumental in the popular uprising that ousted the dictator Ferdinand Marcos in 1986 and President Joseph Estrada in 2001.

Villegas noted that Francis, during the recent World Youth Day celebrations in Rio de Janiero, told the pilgrims to make “a mess” in the Church.

“I want to tell you something. What is it that I expect as a consequence of World Youth Day? I want a mess… I want trouble in the dioceses … I want to see the Church get close to the people. I want to get rid of clericalism, the mundane, this closing ourselves off within ourselves in our parishes, schools or structures. These need to go out!” Villegas quoted the Pope as saying.

“That is what Cardinal Sin led us to do in 1986. He made a ‘mess’ at Edsa. The ‘EdsaMess’ of 1986 was a sign of the Gospel alive in society and not just in the sacristy,” Villegas said.

Villegas said Filipino Catholics should rekindle their faith because some may no longer consider it a “precious gift” and have taken it for granted.

“Perhaps, we ourselves need to recover the humility in faith where in our neediness we kneel before our people and beg for their blessing, if not their forgiveness,” he said.

Villegas said that as Catholics mark the end the Year of Faith, the faithful should “accept our neediness in the light of faith, God who is faithful and forgiving will fold us in his embrace.”

“We pray that our people too will be similarly faithful and forgiving. Pope Francis and Cardinal Sin bring us great lessons in the faith, a humbler and simpler Church,” Villegas said.

DOH to issue ‘passports’ for the inoculated