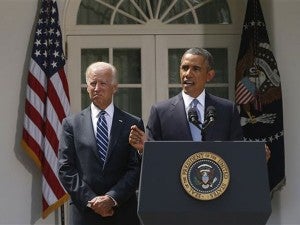 President Barack Obama stands with Vice President Joe Biden as he makes a statement about the crisis in Syria in the Rose Garden at the White House in Washington, Saturday, Aug. 31, 2013. Delaying what had appeared to be an imminent strike, Obama abruptly announced Saturday he will seek congressional approval before launching any military action meant to punish Syria for its alleged use of chemical weapons in an attack that killed hundreds. AP

WASHINGTON — The White House has sent Congress a draft of a resolution authorizing President Barack Obama to use military force against Syria.

The draft follows through on Obama’s decision, announced Saturday, to seek congressional approval for a strike against Syrian President Bashar Assad’s regime.

The resolution lays out the administration’s claim that Assad’s regime killed more than 1,000 people in an Aug. 21 chemical weapons attack. It says the objective of a U.S. military response would be to “deter, disrupt, prevent and degrade” the regime’s ability to use chemical weapons.

The resolution authorizes Obama to use the military as he determines “necessary and appropriate” to serve that goal.

The draft doesn’t lay out a timeline for action. But it does say only a political settlement can resolve the Syrian crisis.