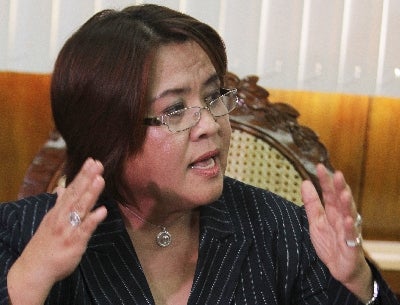 “Our prosecutors have the right to join any peaceful assembly and express their sentiments on, and support to, any legitimate cause, such as abolition of the pork barrel,” De Lima said in a text message.

The event pushed through despite President Benigno Aquino III’s announcement last Friday that it was time to abolish the pork barrel system.
As of posting time, Superintendent Orlando Abellera Mirando Jr. said the number of participants was estimated at 60,000.

“We all have reasons to be enraged and outraged,” De Lima added.

At the vicinity of the Quirino Grandstand, anti-pork statement T-shirts were being sold for P250 each.

Participants were also urged to go to a booth where they may sign up to register their protest against the pork barrel.