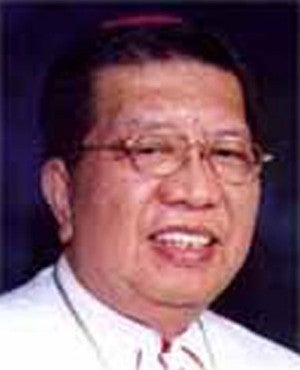 “He announced its (pork barrel) abolition and yet one of his officials tells us that there is still pork barrel. That’s the reason why the people are angry,” Marquez said in his homily during his Sunday Mass at the Saint Ferdinand Cathedral here.

On Friday, Aquino announced the abolition of the lawmakers Priority Development Assistance Fund (PDAF) in a surprise press conference. But Budget Secretary Florencio Abad immediately clarified that the P25.2-billion allocation for the PDAF would stay in the proposed P2.268-trillion national budget for 2014.

“They announced the abolition of PDAF but [Aquino] still has P1-trillion pork barrel. Do you understand that?” Marquez said.

Marquez called the pork barrel as the “root of corruption.”

“What the Filipino people have been demanding is the abolition not only of PDAF but the entire pork barrel system,” Marquez said.

Marquez asked the faithful to join the people’s protest assembly on Monday at the Perez Park here. 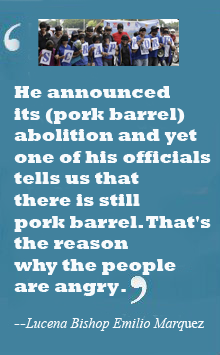 The bishop however said the priests from the Diocese of Lucena could not join the protest action dubbed as “a day of rage at the park,” as they would be starting their annual retreat in Tagaytay City on Monday.

Jansepth Geronimo, spokesman of the People’s Movement in Quezon Against Corruption (PMQAC), the group that initiated the local protest action, thanked Marquez for joining the calls for wider participants.

In his homily, Marquez lamented that rampant graft and corruption continued even under the Aquino administration involving huge sums of money mostly from the multi-billion pesos PDAF of the country’s lawmakers that “often ends at the pocket of corrupt government officials.”

Local government and participants of the “Million People March to Luneta” announced on Sunday the closure of roads surrounding Rizal Park for the anti-pork barrel protest on Monday.

Each member of the House of Representatives is allotted P70 million PDAF annually while each senator receives P200 million.

“[Aquino] often say ‘daan matuwid’ but why he still allow rampant graft and corruption under his administration,” the prelate said.

Marquez cited a posted message in one of the social media in the Internet that chided President Aquino for treating the Filipino people as “children.”

He likened Aquino’s announcement of the PDAF abolition as “candy” that only aims to stop the tide of the growing number of participants to a nationwide protest actions on Monday against government corruption.

“Just stop the protest. Here are candies for all of you,” Marquez described Aquino’s gesture.

Geronimo meanwhile declined to provide numbers of protesters who will attend the assembly.

“All are free to come and join us regardless of their political beliefs. We just want to collectively register our strongest manifestation of protest against the rampant graft and corruption in the government for the sake of the next generation,” he said.

The protest organizers requested the participants to come in “plain slippers” as symbol that the money that corrupt government officials have been looting comes from the taxes paid by ordinary Filipinos.