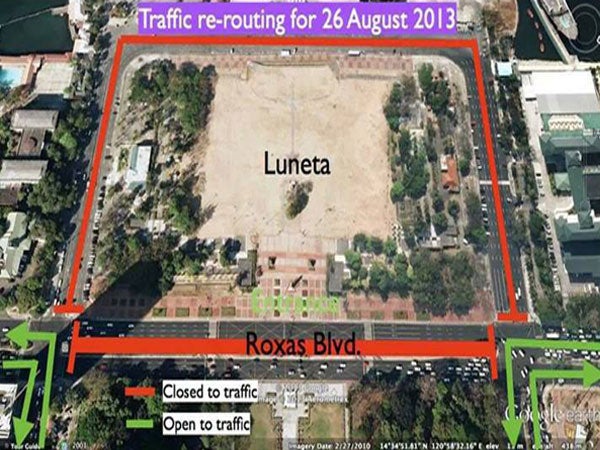 MANILA, Philippines – Local government and participants of the “Million People March to Luneta” announced on Sunday the closure of roads surrounding Rizal Park for the anti-pork barrel protest on Monday.

Manila Vice Mayor Isko Moreno said in his Facebook page that a part of Roxas Boulevard, from Katigbak Parkway to Pedro Gil St., will be closed as early as 5:30 am.

Moreno said vehicles coming from south of Manila may use the northbound lane of Roxas Blvd. then turn right at Quirino Avenue or Pedro Gil St.

Those coming from the north may turn left at Padre Burgos Avenue then right at Maria Orosa Avenue going to their point of destination, posted Moreno.

Public clamor against the controversial Priority Development Assistance Fund and other discretionary funds resulted in calls to converge at Luneta on National Heroes Day.

Amid President Benigno Aquino III’s announcement on Friday of the abolition of the PDAF, netizens and various civil society groups said they will push through with the “picnic rally” on Monday to call for the prosecution of people who misused the public fund.