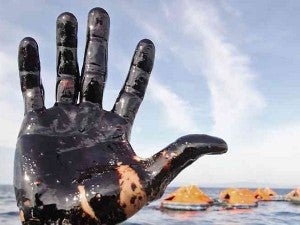 A CLEANUP volunteer raises a hand dripping with oil from the sunken ship MV St. Thomas Aquinas that was rammed by a Sulpicio cargo vessel on Aug. 16. TONEE DESPOJO/CEBU DAILY NEWS

CEBU CITY—The Department of Environment and Natural Resources (DENR) in Central Visayas has estimated that at least P6.5 million in damage compensation should be paid by those who would be held responsible for an oil spill that ravaged mangroves and marine life in Cordova town and Lapu-Lapu City.

The oil spill is a result of the collision between the passenger vessel MV St. Thomas Aquinas and cargo ship Sulpicio Express Siete on Aug. 16.

The regional DENR office based its estimated damage compensation amount on the value of one hectare of mangroves, which it placed at P20,000.

Oil started to gush out of the St. Thomas Aquinas as it lay in the bottom of the sea off the shores of Talisay City after it was rammed by the Sulpicio ship.

The oil has so far destroyed 328 hectares of mangrove plantations in 12 villages in Cordova and Lapu-Lapu.

Montejo said the 328 hectares of mangroves destroyed by the spill were the products of an integrated coastal resource management program that was being implemented by the DENR since 2009 until this year.

The project has received funding from agencies such as the Asian Development Bank and the Global Environment Facility for mangrove rehabilitation and reforestation.

Mangroves that are less than a meter tall have died because of suffocation and too much heat generated by the spill.

Montejo, however, said the DENR has yet to determine who will be required to pay compensation, as it would depend on the results of the investigation of the collision.