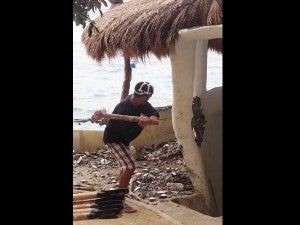 The municipal council of Malay in Aklan province, which has jurisdiction over the 1,032-hectare island, amended on June 18 an ordinance prescribing regulations on the building of structures in Boracay.

Municipal Ordinance No. 328 series of 2013, which is pending review at the Aklan provincial board, allows the construction of a building with a maximum height of five stories on lots with an area of 5,000 square meters but less than 2 ha.

The amended ordinance also allows a building with six stories on property with a lot area of 2 ha or more.

The previous ordinance allows only structures with a maximum height of four stories on land with an area of 1,000 sq m and above.

Originally, only single-story structures made of native materials were allowed on the island. But the tourism boom since the late 1970s and especially during the 1990s resulted in amendments to building limits. Violations of building ordinances have also been widespread.

Councilor Rowen Aguirre, chair of the council’s committee on laws, ordinances, rules and privileges, said the latest amendments to the ordinance were passed upon the request of property owners and other sectors for the need to build more spaces.

The construction of five- to six-story buildings will be allowed only 100 meters from no-build zones, which are 30 m from the waterline.

Violators of the ordinance will be fined P2,500. The ordinance provides for the demolition of structures that violate the law at the expense of their owners.

Government agencies have identified 293 structures on the island, including five government-funded and -operated buildings, as having violated building rules.

But government agencies have refused to release the list because only the Department of Tourism, the lead office in a multiagency task force on regulating development in Boracay and Baguio City, is allowed to do that.

A 130-page environmental master plan for Boracay covering 2008-2033, drafted by the Department of Environment and Natural Resources, has identified unregulated development as among the key reasons for the environmental decline of the island-resort.