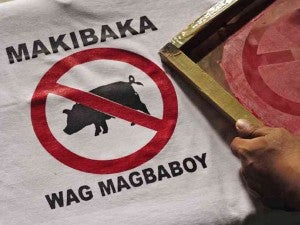 BEEFING AGAINST PORK In preparation for the Million People March against the corruption of the congressional pork barrel, volunteers on Monday start printing shirts for the Davao City edition of a looming nationwide protest initiated by angry netizens. KARLOS MANLUPIG/INQUIRER MINDANAO

The idea of doing away with their allocations under the multibillion-peso Priority Development Assistance Fund (PDAF) has gained ground in the Senate, with 15 senators so far expressing support for the abolition of the pork barrel.

Senators Francis Escudero and Alan Peter Cayetano on Thursday filed separate resolutions seeking the scrapping of the PDAF, the official name of the pork barrel.

This developed as two senior senators from both the majority and minority—Ralph Recto and Gregorio Honasan—expressed the need to abolish not only the PDAF but also the discretionary funds of the executive branch headed by President Aquino.

Members of the minority who supported the idea of scrapping the PDAF included Deputy Minority Leader Vicente Sotto III and Sen. JV Ejercito, the chair of the Senate committee on economic affairs.

Senate President Franklin Drilon himself earlier expressed support for the abolition of the pork barrel, while Sen. Miriam Defensor-Santiago filed a resolution for the three-year phaseout of the congressional pork.

Honasan and Revilla were among the senators whose names figured in the alleged P10-billion pork barrel scam engineered by Janet Lim-Napoles using fake nongovernment organizations (NGOs) and recipients.

Their names were also mentioned in the Commission on Audit (COA) report that found that more than P6 billion in PDAF went to 82 questionable NGOs, including those set up by a number of lawmakers or their relatives.

The others were Minority Leader Juan Ponce Enrile and Jinggoy Estrada.

All the senators linked to the scam and mentioned in the COA findings have denied any wrongdoing and indicated their willingness to be investigated.

“[The PDAF] has already mutated into a multibillion racket allegedly perpetrated by syndicates in both the public and private sectors,” Escudero said in Resolution No. 193 that he filed on Thursday, this week’s first and only working day at the Senate.

“Despite the proper use and disbursement by well-meaning public officials and despite its statutory laudable purpose, the misconception that the pork barrel has become a form of horse trading and a major source of corruption in the government is apparently starting to become real in the eyes of the Filipino people,” Escudero said.

Escudero is the chair of the Senate committee on finance that in the coming weeks will hear the Aquino administration’s proposed P2.226-trillion budget for 2014.

Majority Leader Cayetano said in concurrent Resolution No. 4, which he hopes the House of Representatives will adopt, that the power and mandate of oversight was greatly compromised when legislators themselves were accused of grave acts of abuse and misuse of public funds.

“[The] special audit report of the Commission on Audit covering the years 2007-2009 released on Aug. 16, 2013, showed that at least P6.165 billion of PDAF from 12 senators and 180 representatives were released to 82 questionable nongovernment organizations, which has further fanned the discontent, anger and indignation of the Filipino people,” Cayetano said.

Reports of the massive misuse of the PDAF, as alleged by whistle-blowers and confirmed by the COA report, have gripped the nation and triggered widespread public outrage.

The misuse of public funds has also given rise to calls to abolish the pork barrel and a public gathering called the “Million People March to Luneta” on Aug. 26 in Rizal Park in Manila and other parts of the country to showcase the people’s outrage, but President Aquino and many lawmakers have thumbed down the idea.

Cayetano said the continued presence of the PDAF in the national budget was viewed by the public as an unwillingness of the legislature to address the many abuses and instances of corruption in the system and the unwillingness to heed the voice of the Filipino people for dramatic change.

Recto, the Senate President Pro Tempore and the former chair of the Senate committee on ways and means, said he was supporting the abolition of the pork barrel but added that it would not be enough to ensure graft-free and responsive national budget allocations in 2014 and afterward.

“Together with the abolition of the PDAF, we must reform the entire budget. [There should be] no off-budget items like [funds from] Malampaya, Pagcor, PCSO and minimize lump-sum budgeting to only calamity and contingency accounts,” Recto said, referring to the funds allocated by the executive branch.

“The rest should be line item [allocations].

This will promote transparency and a more effective, efficient and responsive budget,” Recto said in a text message.

Recto said a line-item budget provided for in the General Appropriations Act “will inform local government officials, districts, communities, netizens, civil society where taxpayers’ money is being spent, what project, price and location.”

Aside from calling for the abolition of the PDAF, Honasan called for an impartial probe of the PDAF scam which, he said, put him in a bad light and for the enactment of the Freedom of Information Bill “that would mean full transparency in public affairs.”

“I would support the calibrated abolition of the PDAF, pork barrel, discretionary fund system in all branches, departments of government,” Honasan said in a text message.

Revilla, whose allocations were also linked to the PDAF scam, said, “It looks like it’s time for the total abolition of the PDAF.

Even the insertions [in the budget] should no longer be allowed.”

“It appears that the good intentions of helping the poor and spreading development to the countryside are not realized and are even toyed with when it comes to the implementation,” Revilla said.

A handful in House

Ejercito said senators should be sensitive to what the people want. “We were elected as legislators, not as administrators…. I can manage to perform my duties without the pork barrel. And also as a neophyte senator, I would want to put an end to this issue once and for all and restore the faith of the people in the Senate and Congress,” he said.

In the House of Representatives, a handful of lawmakers have also called for the scrapping of the PDAF.

Sarmiento said he supported President Aquino’s decision to suspend the release of the PDAF since this would be a good opportunity to plug the loopholes in the system and make it transparent and immune to corruption.

He said scrapping the PDAF would be a drastic move that could do more harm than good.

“The complete abolition of the Priority Development Assistance Fund appears to be the spur of the moment answer by people understandably angered by the extent of reported anomalies on the controversial pork barrel. But this may not, after all, be the best option,” he said in a statement.

Sarmiento said that personally, he would not mind if the pork barrel system would be abolished. But it could have “heartbreaking consequences” for poor families who depend on the help of their representatives for needs such as educational assistance and medical care.

The President, he said, “is convinced on the equalizing factor of the PDAF so the poorest of the poor in far-flung areas of the country could share the fruits of development.”

Sarmiento further said that the PDAF system was a good one, but “human greed took advantage of the system’s loopholes.” As long as it is used properly, the pork barrel funds could do a lot of good, he added.

He said the use of the pork barrel had been judicious and strictly regulated since 2010.—With a report from Leila B. Salaverria