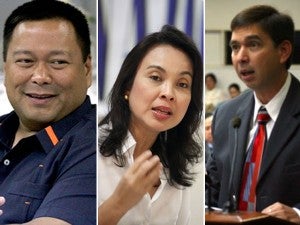 MANILA, Philippines – Moves to scrap the graft-tainted Priority Development Assistance Fund (PDAF) are gaining ground in the Senate ahead of Monday’s social media-initiated protest demanding for its abolition.

After Senate Majority Leader Alan Peter Cayetano and Senator Francis “Chiz” Escudero filed separate Senate resolutions to junk the “pork barrel” funds, more senators expressed support for the move to restore the credibility of Congress that has been rocked by the “pork” scandal.

One of them was Senator Ramon “Bong” Revilla Jr. The lawmaker from Cavite was among those mentioned in media reports, whose PDAF has been allegedly used to fund questionable non-government organizations (NGOs).

“It looks like it’s time for the total abolition of the PDAF. Dapat pati yung mga insertions hindi na rin payagan (Even in the insertions should not also be allowed),” Revilla said in text message sent to reporters by his staff member.

“It appears that that the good intentions of helping the poor and spreading development to the countrysides are not realized at napaglalaruan pa pagdating sa (manipulated during) implementation,” he said.

Revilla said he was thankful that the Senate would now look into the matter to ferret out the truth.

Senator  Teofisto  Guingona  III, chairman of the Senate blue ribbon  committee that will investigate the  pork barrel scam  next  week,  said he would also vote for the abolition of PDAF.

“I will vote for the abolition of the pork barrel,”   Guingona said in an interview  with reporters.

Senate Pro Tempore Ralph Recto and Senators Loren Legarda, and Jose Victor “JV” Ejercito had earlier expressed their support for the abolition of the pork barrel.

Recto and Legarda belong to the majority bloc in the Senate while Ejercito is a member of the minority group.

“I support the scrapping of PDAF,” Recto said in a text message when asked if he would support moves in the Senate to abolish the “pork barrel” funds.

“However, the entire national budget should be more transparent. All projects should be by line item in the General Appropriations Act. So each local government, district community will know where money is spent and what is to expect,” he said.

Recto said the entire national budget should be reformed.

Legarda, in a separate text message, said she would not use her PDAF this 16th Congress.

“I’m not using my PDAF in the 16th Congress and I am in favor of its abolition,” she said.

“Let us legislators stand on the laws we enact,” Legarda said.

Ejercito said he would not only support an investigation into the alleged pork barrel scam, but he expressed willingness to give up his PDAF.

“As a neophyte senator, I came at a time when the institution is under fire because of the PDAF scandal. To restore the credibility of Congress, I support the investigations so that those implicated may have the chance to clear their names and those guilty be made to face the music,” he said.

“We were elected as legislators, not as administrators. We have to be sensitive to what the people want after all we are their representatives. I can manage to perform my duties without the pork barrel.”

“And also as a neophyte senator, I would want to put an end to this issue once and for all and restore the faith of the people in the Senate and Congress,” Ejercito added.

“There are only two real options both of which are acceptable to me. First, is the abolition (of senators’ pork barrel) as proposed by Senator Miriam. Second,  is reform which would no doubt involve drastically improving safeguards against corruption, including listing of specific projects ahead of time and limiting beneficiaries to schools and government agencies,” Angara said.

Another neophyte senator, Nancy Binay, said she would rather wait for the result of an inquiry into the pork barrel scam before making her decision on the issue.

“I would rather wait for the final result of the probe before calling for regulation or abolition. At the moment, I support the suspension (of PDAF) based on the reasons laid down by the President,” said Binay, also a member of the Senate minority bloc.

But she acknowledged that there was a need to review the policy and process how and to whom PDAF should be entrusted.

“One of the problems is that NGOs (non-government organizations) have been empowered to the point that they have escaped accountability,” she pointed out.

An exposé by the Philippine Daily Inquirer revealed a tangled  web of corruption, with Janet Lim-Napoles as the alleged brains behind a P10-billion scheme that channeled funds over the past 10 years from the pork barrel and other state agencies into kickbacks of up to 60 percent using NGOs.

The Commission on Audit has reported its special audit showing that at least 74 legislators exceeded their annual allocations of P70 million for representatives and P200 million for senators between 2007 and 2009.

Of the P12.018 billion in taxpayers’ money allocated to the pork barrel, only about 10 to 20 percent were spent on the actual projects, COA chair Grace Pulido-Tan said Friday.

Outraged Filipinos in the country and overseas are utilizing the social media to organize protests on Monday to demand the abolition of the “pork barrel.”

But Aquino on Monday rebuffed the mounting calls, saying PDAF has many good uses. With a report from the Philippine Daily Inquirer