A slideshow of photos of the flood caused by the southwest monsoon rains that lashed Metro Manila on Sunday night until Monday. The photos were taken on St. Paul Road, Barangay San Antonio, in Makati City mid-afternoon Monday.  CONTRIBUTED PHOTOS

Tropical Storm “Maring” may develop into a typhoon before it leaves the Philippines on Thursday, with its intensification of the southwest monsoon expected to bring heavy rains to Luzon, including Metro Manila, until Wednesday.

Torrential rains brought by Maring (international name: Trami) shut down Metro Manila on Monday. The government called off classes in schools and most private businesses suspended work due to flooding caused by incessant rains that started on Sunday morning.

Classes are suspended at all levels in Metro Manila on Tuesday except in Pasig, Mandaluyong, Marikina, Navotas and Valenzuela cities where there will be no classes only at the preschool, elementary and high school levels.

Rising floodwaters forced people in many parts of the metropolis and nearby provinces to flee their homes and stay in government-run shelters.

To stop unscrupulous traders from taking advantage of the situation, the Department of Trade and Industry (DTI) imposed a freeze on the prices of basic goods in several areas in Luzon that had declared a state of calamity.

Victorio Mario A. Dimagiba, officer in charge of the consumer welfare and business regulation group at the DTI, said that as of noon Monday, prices should have already been frozen in two towns in Ilocos Sur (Sta. Maria and Narvacan), two towns in Laguna (Sta. Rosa and San Pedro), and Cavite.

Dimagiba said the freeze remained in effect until the lifting of the states of calamity.

President Aquino blamed the extensive flooding on heavy rains brought by Maring, aggravated by high tide at around 1 a.m. Monday.

“Heavy rain is anything above 7.5 millimeters per hour,” Aquino said in a speech at Ateneo de Manila University. “Now here, we have 30 mm within one hour, or if rainfall has continued for the past three hours and is more than 65 mm,” he said, reading an advisory from the state weather bureau. 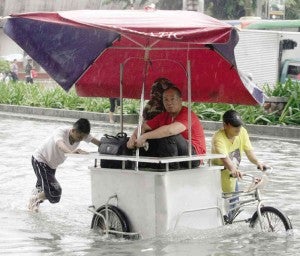 Aquino said residents of low-lying areas were advised on Sunday night to move to safer grounds, and that Metropolitan Manila Development Authority (MMDA) personnel began to clear the Metro roads of storm debris and trash on Sunday night.

“There are no fresh instructions,” Aquino said. “Instructions had been given at the start, with the very first storm that we encountered.”

Jori Loiz, a senior forecaster at the Philippine Atmospheric, Geophysical and Astronomical Services Administration (Pagasa) said Maring, as of

4 p.m. Monday, was observed to have maintained its strength and was almost stationary for 12 hours as it began to make a U-turn for Taiwan.

Loiz said Maring was 580 kilometers east of Itbayat town, Batanes province, with maximum sustained winds of 75 kilometers per hour near the center and gusts of 90 kph, moving east-northeast at 7 kph.

Loiz said low pressure in the northeast, outside the Philippine area of responsibility, was hampering the movement of Maring, a normal occurrence when two weather disturbances interact.

Loiz alerted Metro Manila, the Ilocos region, Central Luzon, Calabarzon and Panay Island, as well as the provinces of Benguet and Occidental Mindoro, to the possibility of monsoon rains, which could generate flash floods and landslides.

The estimated rainfall within the 300-kilometer diameter of the storm was heavy to intense at 10 mm per hour to 25 mm per hour, but Maring was expected to continue to intensify the southwest monsoon and bring moderate to heavy rainshowers and thunderstorms, mostly over the western section of Luzon.

Loiz cautioned fishermen, particularly those using small vessels, against venturing out to the seas off Luzon due to possible big waves generated by the southwest monsoon.

Loiz said that it was possible for Maring to develop into a typhoon as it hovered over the Pacific Ocean.

Although Maring was far from the country’s land mass, it was expected to continue to intensify the southwest monsoon and bring rains to Luzon until Wednesday, Loiz said.

But compared to last year, when heavy rains lasted for several days, the southwest monsoon did not dump too much rain on Luzon this time, as there were long periods without rain.

Executive Director Eduardo del Rosario of the National Disaster Risk Reduction and Management Council (NDRRMC), speaking at a meeting of the council at Camp Aguinaldo yesterday, said the government’s emergency response efforts were focused on the worst-hit provinces, Laguna and Cavite, which had declared a state of calamity.

Del Rosario said the heavy rainfall in Sangley, Cavite, and an irrigation dam that collapsed in Tanza inundated the province.

Flooded were the towns of Tanza, Rosario, Bacoor, Noveleta and Carmona in Cavite. In Laguna the towns of San Pedro, Biñan and Sta. Rosa were flooded.

Tomazar said there were 11 evacuation centers in Laguna and Cavite.

Floodwaters began to recede by noon Monday in a few areas, leaving most of Laguna and Cavite under water.

Most of the two provinces were cut off from Metro Manila with floodwaters along the South Luzon Expressway rising as high as 1.2 meters.

Ochoa appealed to the public to stay indoors and limit traveling as Maring continued to intensify the southwest monsoon, causing heavy rains.

“We are advising the public not to travel as much… Be vigilant. Those who are in the evacuation centers should stay put and should not return to their homes until they are given clearance to do so,” Ochoa said in Filipino.

Del Rosario said all first responders and the local chief executives in Central Luzon were “preparing for any possibility.”

Roxas said he had ordered the Philippine National Police to activate its disaster incident management task groups in areas affected by the storm.

“I have directed the PNP to coordinate with the local disaster risk reduction and management councils to see how the police can be of assistance to them,” Roxas said in a statement.

Roxas, vice chair of the NDRRMC, said the PNP had prepared a “response checklist” for responding to typhoons, flooding and other natural disasters such as tsunamis, earthquakes and volcanic eruptions.

Three people were killed at the height of the monsoon rains. The NDRRMC identified the fatalities as Celedenonio Gamban, 39, who drowned in Tanza; Austin Betasolo, 5, who was killed after a fence collapsed in Barangay (village) Tatalo, Binangonan, Rizal province, and Franco Pedrito Cawayan, 30, of Besao, Mountain Province.

Cawayan was killed on Sunday after the jeepney he was riding in along with 49 others met an accident in Sitio Caluat, Cabugao, Apayao province.

Nine other passengers were injured in the accident. They were taken to Connor District Hospital and Tuguegarao Hospital where Cawayan was declared dead.

In Pampanga province, Renato Lacsamana, 64, a former village watchman in Lubao town, drowned Monday morning as he went out to check the water level at the Porac-Gumain River in Barangay Sta. Cruz, the provincial disaster office said.

Four people were reported missing. They were identified as Joros Miyage, 7, of Tanza who was reported to have drowned; Marissa Manaois, 40, who was reported trapped in Sumaguing Cave in Sagada, Mountain Province; Rosalino Calantay, 30, who went missing after he tried to cross the Damangil River in Barangay Amtuagan in Tubo town in Abra province; and Monching Bakidan, 20, was also reported missing after he tried to cross the Chico River in Sitio Pampang, Barangay Samoki in Bontoc, Mountain Province.

Pagasa official Esperanza Cayanan scotched speculations that there was a delay in the weather bureau’s warning system about the rains because the Doppler radar in Tagaytay City was under repair.

She said the Doppler radar in Tagaytay was hit by lightning in May.

The MMDA’s Tolentino convened the metropolitan disaster council on Monday as rain continued to lash the city.

Tolentino said at least 807 families from different parts of the metropolis had been evacuated to safer grounds as floodwaters began to rise in their communities.

He said he expected “a bigger problem” if the rains persisted through the night.

Incessant rain and flooding shut down schools at all levels, closed government offices, including the Technical Education and Skills Development Authority (Tesda), which should have begun observing its 19th

The Senate and the Supreme Court also called off work and the Department of Foreign Affairs suspended consular services at its headquarters and main consular offices at Aseana Business Park in Parañaque City.

The US Embassy shut down operations and the British Embassy suspended consular services, but not its visa operations.

Other embassies remained operating, among them the missions of the European Union, France, Australia, Canada, Japan and Israel.

The country’s two biggest airlines, Philippine Airlines and Cebu Pacific, temporarily waived rebooking fees for passengers who failed to make their flights on Monday due to the bad weather.

In Ilocos Sur province, the local councils of Candon City and the towns of Sta. Maria and Narvacan declared a state of calamity on Monday.

Flooding was also reported in the provinces of Bulacan, Pampanga, Bataan, Zambales and Pangasinan.

In Mountain Province, rescuers began the search for Manaois, who is from Pangasinan, after pulling out 30 tourists and guides from the flooded Sumaguing Cave in Sagada town.

The tourists, including 13 Japanese, had been huddled inside the cave since Sunday as strong rains battered parts of the Cordillera region.

Four of those rescued were taken to St. Theodore Hospital in Sagada: Vilma Pusao and Aiza Lifano of Natonin, and Jun Bendiola and an unidentified resident of Metro Manila.

The Japanese tourists were examined at the hospital then discharged, police said.

The Filipino tourists returned to their hotels, police said.

Meanwhile, the Laguna Lake Development Authority (LLDA) said the water level in the lake rose overnight from 11.6 meters to 12.1 meters.

The lake’s critical level, or the maximum annual level, is 12.5 meters, according to LLDA hydrologist Emil Hernandez.

“[Going] beyond this level would mean the lake [exceeded] its volume capacity. [This] may trigger more than a monthlong lakeshore flooding like what happened after (Tropical Storm) “Ondoy” (in 2009) and the [monsoon rains last year],” Hernandez, who is also an engineer, said.