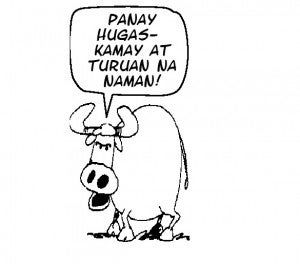 Stop pulling a fast one.

That was the advice one party-list congressman gave to implementing agencies—or IAs—that facilitated the release of P6.156 billion in pork barrel to supposedly fake nongovernment organizations (NGOs) from 2007 to 2009.

Some of them have blamed the legislators themselves for the financial mess. They also gave excuses in defense of the allegedly fake NGOs they dealt with.

Some of the NGOs linked to the mess can no longer be traced.

Businesswoman Janet Lim-Napoles, who has been linked to the supposed scam, is now the object of a nationwide National Bureau of Investigation manhunt.

“Stop making palusot,” ACT Teachers Rep. Antonio Tinio said, referring to the IAs. “Stop being in a state of denial, that is the first step to true reforms.”

For his part, Bayan Muna Rep. Neri Colmenares said: “Maybe if it was P10 million for one year, they can say that people can make mistakes but it went on for 10 years for P10 billion. It’s impossible for Napoles to do this without the support of implementing agencies.”

The DSWD management has told the COA: “Who shall be accountable for irregularities committed by NGOs? The department is merely facilitating the release of fund transfers to the NGO and neither implements the projects or programs proposed nor is involved in the transfer of funds.”

“The length of time between project implementation (2007) and the actual COA audit may have contributed to NGOs no longer in their given addresses with the possibility of them having folded up or moved to other areas,” the TRC said for its part.

The DSWD agreed some of the NGOs might have moved or closed down entirely because of the lag time between the release of the funds and the audit.

The TRC did not see anything wrong with the NGOs having interlocking officers, claiming “it is not uncommon in the private sector for one person to be involved in more than one venture.”

The DSWD said: “Having a person connected with several NGOs would enhance the possibility of cooperation among these NGOs, rather than detract from the performance of these NGOs.”

But the COA was skeptical, saying in its report: “It can also work otherwise … as these NGOs submit the same list of beneficiaries, dealing with the same questionable suppliers and submitting the same spurious documents.”

The DSWD said the absence of business permits, use of official tax documents of other establishments and the failure to report their incomes were the fault of the suppliers and not the IAs.

Also, the DSWD said, there was a great possibility that some beneficiaries could not be traced because they had changed addresses and that not appearing on the voter’s list did not mean he or she is not a resident of the area.

For its part, the NLDC, which is under Land Bank of the Philippines, said it “fully relies on the office of the legislator to supervise and ascertain project implementation premised on their moral and social obligation to protect the interest of their constituents.”

The NLDC claimed that as early as 2008, it had asked the Department of Budget and Management not to be included as a pork barrel conduit because it would run counter to its mandate of micro-lending.

The NLDC also said it was also up to the legislators to ask their constituents whether they had benefited or profited from their projects.

The COA argued that if these agencies already knew they could not handle these huge transactions, the prudent thing would have been to decline.

COA Chair Grace Pulido-Tan reckoned that only 10 to 20 percent of the P6.156 billion that the agency audited were used for the livelihood projects as most of them were ghost deliveries.

The COA report stated that the IAs’ responsibility was not only to transfer funds but also “be responsible for every fund received irrespective of fund source.”

Tan also noted that IAs get a standard commission fee of 3 to 3.5 percent for every transaction.

The COA has also criticized the IAs for awarding themselves millions of pesos in allowances, benefits, cash advances and bonuses without any basis.