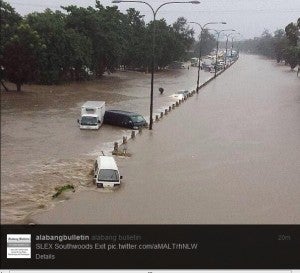 As early as 5 a.m. on Monday, parts of the South Luzon Expressway were flooded, said Christy Lleno of SLEx Traffic Monitoring in an interview with Radyo Inquirer 990AM.
The flashflood near the Southwoods Exit area resulted in heavy traffic congestion of around 4 to 5 kilometers for the Batangas-bound lanes.
Waters had reportedly reached the median barriers of the highway which are as tall as an average car.
On Twitter, Alabang Bulletin (@alabangbulletin) posted a photo showing a flooded SLEx. Four cars were seen submerged in murky water.
“For those coming from Alabang and going to Batangas, we opened a counterflow [lane] so they may turn back. It is not advisable to pass through that area right now,” Lleno said, adding that they have also diverted Manila-bound vehicles through Carmona and Sta. Rosa, Laguna.
She said their engineers are still looking into the cause of the flash flood.
Meanwhile, at least 100 meters of the Subic-Clark-Tarlac Expressway were affected by a mudslide, according to Therese Lunsong of the SCTEx Traffic Control.
Lunsong told the radio station that Kilometer 35+500 heading Subic is undergoing clean-up operations near the vicinity of Porac, Pampanga, because of the incident.
She said they have also opened a counterflow lane for those going to Subic as their highway patrol and emergency response team work together to clear the area.
Lunsong said traffic in SCTEx is light despite the landslide.
The Toll Regulatory Board posted on Twitter that Porac and Dinalupihan areas of the SCTEx are flooded but are still passable.