Laguna placed under state of calamity 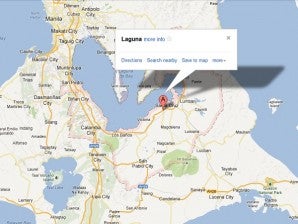 MANILA, Philippines–Laguna province has been placed under a state of calamity Monday after tropical storm Maring brought heavy flooding and torrential rains to most parts of the province.

Laguna Governor Emilio Ramon Ejercito said in a radio interview that the calamity wrought by the monsoon rains in the province is “Ondoy and Habagat combined.”

In Santa Rosa City, Mayor Arlene Arcillas also sought additional personnel from the Philippine Army to assist in the ongoing evacuation and relief operations in 15 out of 18 barangays (villages) swamped by floods.

Arcillas said strong current has rendered most roads in Santa Rosa impassable and has hampered rescue trucks from responding to stranded residents.

As of 12 a.m., the towns of San Vicente, Poblacion, Aplaya, San Jose, and Santo Domingo were severely inundated., he said.

But Carencia said relief operations are already underway. As of Monday morning, 9,000 Biñan residents were already moved to evacuation centers.

Mayor Lourdes Cataquiz of San Pedro City in Laguna said eight San Pedro towns have been submerged by the floods, especially those near the Laguna Lake shoreline.

Cataquiz stressed that Maring is worse than tropical storm Ondoy in terms of flooding in Laguna.

“Many areas in San Pedro were closed due to heavy floods. The rescuers cannot go on with the operations because they were trapped,” she said.