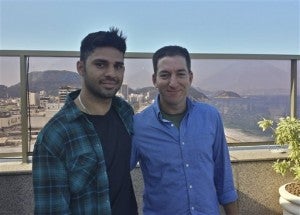 In this undated photo released by Janine Gibson of The Guardian, Guardian journalist Glenn Greenwald, right, and his partner David Miranda, are shown together at an unknown location. AP File Photo

LONDON – The partner of the Guardian journalist who worked with Edward Snowden to expose US surveillance tactics was detained for almost nine hours Sunday under British anti-terror legislation.

Metropolitan Police confirmed that David Miranda, husband of journalist Glenn Greenwald, was held up as he passed through London’s Heathrow Airport on his way home to Rio de Janeiro from Berlin.

“A 28-year-old man was detained at Heathrow Airport under Schedule 7 of the Terrorism Act 2000,” said a police spokesman.

“He was not arrested. He was subsequently released,” he added.

The Brazilian government said it had objected to the detention of one of its citizens and expressed “grave concern” about steps taken by the British authorities that led to Miranda being “held incommunicado” at the airport.

A statement from the foreign ministry in Brasilia said its embassy in London contacted British officials prior to Miranda’s release and that Brazil would also be seeking an explanation from US officials about the incident.

“This measure is without justification since it involves an individual against whom there are no charges that can justify the use of that legislation,” added the statement.

The ministry added that it expected there would be no repeat of the incident.

Greenwald analysed and published information on documents released by former US security operative Snowden, which revealed mass surveillance programmes by the US National Security Agency (NSA).

Some of Miranda’s electronic equipment including his mobile phone, laptop, camera, memory sticks, DVDs and games consoles was confiscated, according to the Guardian.

“We were dismayed that the partner of a Guardian journalist who has been writing about the security services was detained for nearly nine hours while passing through Heathrow airport,” said a spokesman for the paper.

“We are urgently seeking clarification from the British authorities.”

Greenwald later wrote an article on the Guardian website in which he said he had received an early morning phone call regarding Miranda from someone identifying themselves as a security official at Heathrow.

“The security official told me that they had the right to detain him for up to nine hours in order to question him, at which point they could either arrest and charge him or ask a court to extend the question time,” he stated.

“The official— who refused to give his name but would only identify himself by his number: 203654 – said David was not allowed to have a lawyer present, nor would they allow me to talk to him.”

Greenwald, who called the Guardian after the phone call, wrote that the security officials “spent their time interrogating” Miranda about the NSA reporting which he and other contributors to the newspaper are doing.

A Guardian lawyer told Greenwald that Miranda was “in very good spirits and quite defiant” following the incident and had asked the lawyer “to convey that defiance to me.”

“I already share it, as I’m certain US and UK authorities will soon see,” he warned.

“It is utterly improbable that David Michael Miranda, a Brazilian national transiting through London, was detained at random, given the role his husband has played in revealing the truth about the unlawful nature of NSA surveillance,” said Widney Brown, senior director of international law and policy at Amnesty.

“David’s detention was unlawful and inexcusable. He was detained under a law that violates any principle of fairness and his detention shows how the law can be abused for petty vindictive reasons,” he added.

He is wanted by Washington on espionage charges linked to his media disclosures about the secret details of US surveillance programs.

“Holy CRAP – what is our government up to?” the actor Stephen Fry wrote on the microblogging website, attaching a link to Greenwald’s Guardian article about Miranda’s detention.