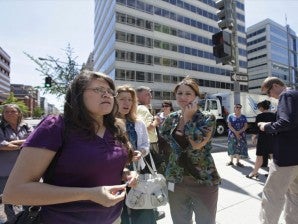 ALL SHOOK UP. Office workers gather on the sidewalk in downtown Washington, Tuesday, Aug. 23, 2011, moments after a 5.9 magnitude tremor shook the nation's capitol. The earthquake centered northwest of Richmond, Va., shook much of Washington, D.C., and was felt as far north as Rhode Island and New York City. (AP Photo/J. Scott Applewhite)

WASHINGTON — A 5.9 magnitude earthquake centered in Virginia shook much of Washington, D.C., and was felt as far north as New York City and Martha’s Vineyard, Massachusetts, where President Barack Obama is vacationing.

The U.S. Geological Survey said the earthquake was half a mile (800 meters) deep. Shaking was felt at the White House and all over the East Coast, as far south as Chapel Hill, North Carolina. Parts of the Pentagon, White House and Capitol were evacuated. There were no immediate reports of injuries.

The quake was centered northwest of Richmond, the captial of Virginia, and south of Washington.

Obama and many of the nation’s leaders were out of town on August vacation when the quake struck at 1:51 p.m. EDT (1751 GMT). The shaking was felt on the Martha’s Vineyard golf course as Obama was just starting a round.

The East Coast gets earthquakes, but usually smaller ones and is less prepared than California or Alaska for shaking.

At Reagan National Airport outside Washington, ceiling tiles fell during a few seconds of shaking. Authorities announced it was an earthquake and all flights were put on hold.