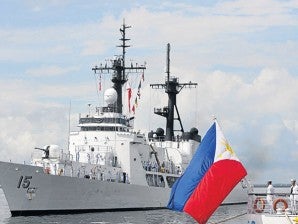 SHIP OF STATE. The BRP Gregorio del Pilar (PF15) docks at Pier 13 in Manila where President Aquino waits for the commissioning ceremonies. The arrival of the decommissioned US Coast Guard cutter, ending a 33-day voyage across the Pacific Ocean, is part of the government’s drive to modernize the Philippine Navy amid tensions with China over the disputed Spratly Islands in the West Philippine Sea. AFP

The Philippines’ newest warship, which sailed on Tuesday into Manila Bay after a 14,679-kilometer voyage from the United States, was hailed by President Benigno Aquino III as a symbol of the country’s determination to defend its claims in the disputed West Philippine Sea (South China Sea).

“This is just the beginning. Expect more good news because we will not stop at one ship,” Mr. Aquino said as the refurbished Hamilton-class cutter BRP Gregorio del Pilar dropped anchor, ending a 33-day voyage across the Pacific Ocean.

“This ship symbolizes our newly acquired ability to guard, protect, and if necessary, fight for the interests of our country,” the President said.

Mr. Aquino said the “new” flagship vessel would help protect the country’s exclusive economic zone and its oil and gas exploration activities in the contested sea.

“This will upgrade our capability to guard our exclusive economic zone as well as the service contract areas,” he said in a welcoming speech.

Many of those areas are claimed by China, which insists it has sovereign rights to almost all of the disputed territory, even waters approaching the coasts of Southeast Asian countries.

Other parts of the West Philippine Sea, including a cluster of isles and reefs called the Spratly Islands, are believed to be rich in oil and mineral resources and straddle vital sea lanes. They are also claimed by Brunei, Malaysia, Taiwan and Vietnam.

“[It] now symbolizes the revival of the Philippine Navy,” Pama said at the welcoming ceremony.

“The Gregorio del Pilar’s ability to operate in adverse conditions… will be vital in securing our maritime nation’s territory and asserting our sovereignty in areas where our capability is now seriously needed, he added.”

Officials said the 95 crew members of the Gregorio del Pilar impressed the US Navy with how quickly they learned how to operate one of the largest ships ever built for the US Coast Guard.

Led by Capt. Alberto Cruz, the 13 officers—three of them women—and 82 enlisted personnel trained rigorously in the United States from February before setting out for the Philippines.

“They were quite impressed with our troops,” Pama said.

An initial batch that included Cruz and 20 other officers and enlisted personnel underwent rigorous training on board the USCG Boutwell, a sister ship, for two months.

The 21-member team then trained the next batch of 74 crew members.

The ship was acquired under the Mutual Defense Treaty that gives the Philippines access to decommissioned US defense equipment.

The Philippine military’s budget of about $2.5 billion this year is just a fraction of China’s published defense spending of about $90 billion.

Manila clinched the deal to acquire the Gregorio del Pilar—named after the youngest Philippine revolutionary general who fought the Spanish and died in combat against American forces—early this year before the tensions with China flared.

The United States has since promised to help upgrade the Philippine military further, but no details have been released.

China’s state-run media this month warned the Philippines it could pay a “high price” for building up its military presence in the West Philippine Sea.

But bilateral ties remain strong in other areas, and Mr. Aquino will pay a state visit to China next week.

Mr. Aquino spent nearly two hours in a tour of the vessel. A select group of reporters were also allowed to tour the ship.

“I want everything. But what we will acquire (are) lead-in jet trainers to keep the skill (levels) of the fighter pilots,” Mr. Aquino said.

“There’s a whole list of modernization items for the (Armed Forces of the Philippines) and also the (Philippine National Police) and the Coast Guard,” the President added.

The country has been defenseless in its airspace since 2001, when the Philippine Air Force last flew a fighter jet. The obsolete F-5 jets were decommissioned in 2005.

Mr. Aquino said the country had to carefully weigh whether acquiring a submarine is “practical, whether or not it meets our needs.”

He cited the experience of a Southeast Asian country, which he did not name, that bought submarines from Eastern Europe for a “bargain” price of $12 million.

But the buyer discovered that the submarines had to be refitted for tropical purposes so it ended up spending the same amount it would have spent had it bought new submarines.

Pama said the Navy planned to acquire at least two more decommissioned ships from the US Coast Guard.

The Philippine Navy has an old and badly equipped fleet of fewer than 80 ships to protect its coastline and vast marine interests. The fleet is mostly made up of aging World War II vessels. With reports from AFP and AP