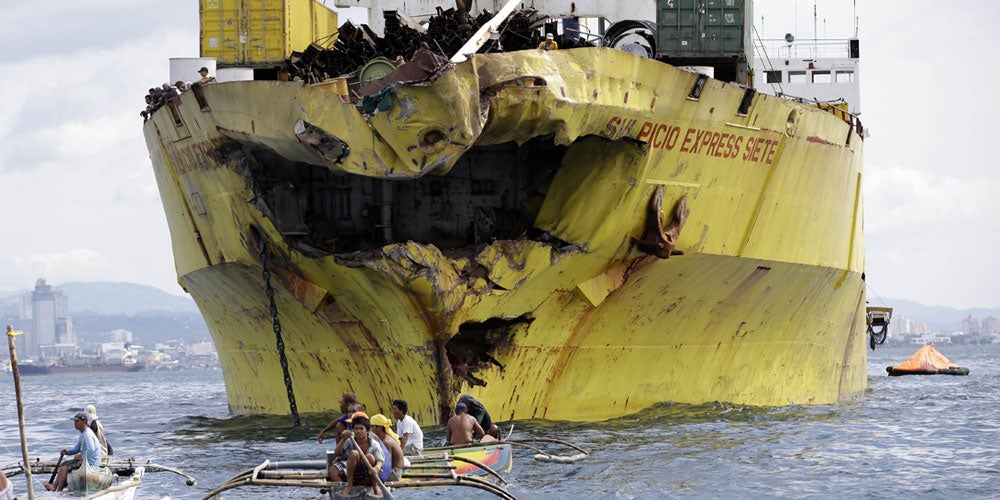 DENTED. Volunteers search near the damaged cargo ship Sulpicio Express Siete a day after it collided with a passenger ferry off the waters of Talisay City, Cebu on Saturday. AP

MANILA, Philippines—Rescuers scour the waters for more than 170 people missing after a passenger ferry collided with a cargo ship and sank almost instantly off Cebu province in thick darkness, with 31 already confirmed dead.

Coast guard and military vessels, as well as local fishermen in their own small boats hauled 629 people out of the water alive.

Abaya said 172 people were still unaccounted for and 31 bodies had been retrieved. The Philippine Coast Guard has warned the death toll would inevitably rise.

Reporters at the site, about two kilometers from shore, saw the bodies coated with fuel and oil that spilled from the ferry.

PCG deputy chief Rear Admiral Luis Tuason, vice commandant of the coast guard, said that some of the missing could be trapped inside the vessel that sank in waters 100 feet deep off Talisay City in Cebu province, about 570 kilometers south of Manila.

“There could be more bodies there, but there were ropes inside that our divers could get entangled in,” Tuason said on radio.

The captain of the ferry MV Thomas Aquinas, which was approaching the port late Friday, ordered the ship abandoned when it began listing and then sank just minutes after collision with the MV Sulpicio Express Siete, he said.

“It did not take long, about 10 minutes, before the ferry sank,” Tuason said.

“The captain managed to declare abandon ship and they distributed life jackets but, because of the speed by which it went down, there is a big chance that there are people trapped inside.”

One survivor, Maribel Manalo, 23, recounted to her brother the horror of suddenly being plunged into the cold water in darkness, and emerging from the chaos without her mother.

“She said there was a banging noise then the boat suddenly started sinking,” the brother, Arvin Manalo, told Agence France-Presse.

“They quickly strapped on life jackets and then jumped into the dark sea. She said they felt like they were pulled under. My sister said she pushed our mother up, but they got separated.

“My sister was rescued. My sister knows how to swim, but my mother does not.”

He said their mother, 56, remained missing.

Fifty-eight babies were among the passengers on board the ferry, according to the coastguard, and it was unclear how many of them survived.

The accident occurred at 9 p.m. in calm waters near the mouth of the port between two and three kilometers from shore, authorities said.

Navy divers on a speed boat scoured the sea on Saturday amid orange life rafts that had already been mostly emptied, according to an AFP photographer on the scene.

However two lifeless bodies were seen on one raft.

Tuason said helicopters had also been deployed and specialist divers sent to search through the sunken vessel.

Local fisherman Mario Chavez said he was one of the first people to reach passengers after the ferry sank in the 270-feet channel.

“I plucked out 10 people from the sea last night. It was pitch black and I only had a small flashlight. They were bobbing in the water and screaming for help,” he said.

“They told me there were many people still aboard when the ferry sank… there were screams, but I could not get to all of them.”

The cargo ship, Sulpicio Express Siete, which had 36 crew members on board, did not sink. Television footage showed its steel bow had caved in on impact but it sailed safely to dock.

Tuason said it appeared one of the vessels had violated rules on which lanes they should use when travelling in and out of the port.

The enforcement office chief of the government’s Maritime Industry Authority, Arnie Santiago, said the strait leading into the Cebu port was a well-known danger zone.

“It is a narrow passage, many ships have had minor accidents there in the past. But nothing this major,” Santiago told AFP.

“There is a blind spot there and each ship passing through needs to give way in a portion of that narrow strip.”

The Thomas Aquinas was a “roll-on, roll-off” ferry, which allows vehicles to be driven aboard and is commonly used in the Philippines.

Ferries are one of the main modes of transport across the archipelago of more than 7,100 islands, particularly for the millions of people too poor to fly.

But sea accidents are common, with poor safety standards and lax enforcement typically to blame.

The world’s deadliest peacetime maritime disaster occurred near the capital, Manila, in 1987 when a ferry laden with Christmas holidaymakers collided with a small oil tanker, killing more than 4,300 people.

In 2008, a huge ferry capsized during a typhoon off the central island of Sibuyan, leaving almost 800 dead. 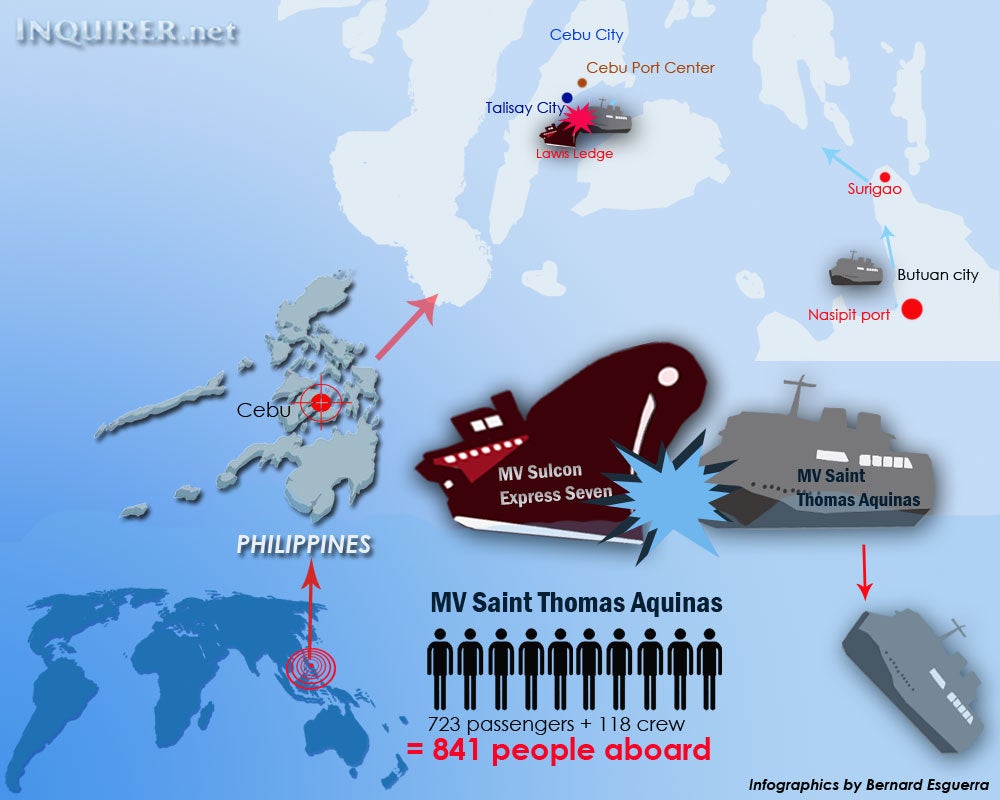 An infographic account of the collision between the MV Thomas Aquinas of 2GO Shipping Lines and the Sulpicio Express 7 near the port of Cebu Friday night, Aug. 16, 2013, that left dozens of people dead and over 200 missing. The Philippine Coast Guard is leading the search and rescue operations for survivors.