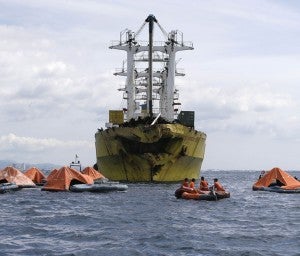 A cluster of life rafts floated near the cargo ship Sulpicio Express Siete with its damaged bow a day after it collided with a passenger ferry off the waters of Talisay city, Cebu province in central Philippines, Saturday Aug. 17, 2013. Divers combed through a sunken ferry Saturday to retrieve the bodies of more than 200 people still missing from an overnight collision with a cargo vessel near the central Philippine port of Cebu that sent passengers jumping into the ocean and leaving many others trapped. At least 28 were confirmed dead and hundreds rescued. The captain of the ferry MV Thomas Aquinas, which was approaching the port late Friday, ordered the ship abandoned when it began listing and then sank just minutes after collision with the MV Sulpicio Express, coast guard deputy chief Rear Adm. Luis Tuason said. AP

MANILA, Philippines—The sinking of a ferry following a collision with a cargo ship is the latest of many deadly accidents to have plagued the Philippines’ sea transport industry.

Inter-island ferries are one of the main forms of transport for millions of Filipinos across the archipelago, mainly because they are cheaper than air travel.

However, bad weather, particularly during the typhoon season, as well as poor maintenance, overloading of vessels and lax enforcement of safety regulations have led to many disasters.

Here is a list of major accidents in the Philippines over the past three decades:

August 16, 2013: At least 26 people are confirmed dead and 215 others are missing after the passenger ferry St Thomas Aquinas collides with a cargo vessel near the port of Cebu.

June 14, 2013: Seven people are killed when the Lady of Mount Carmel ferry mysteriously sinks near the central island of Masbate.

June 12, 2012: A storm capsizes a wooden-hulled ferry off the Coast of Palawan Island, killing at least seven.

December 24, 2009: Four people are confirmed dead with 23 missing after the wooden-hulled Catalyn B with 73 people on board collides with a fishing vessel at the mouth of Manila Bay.

September 6, 2009: Nine people are killed after the Superferry 9 tilts sharply and then sinks near the southern city of Zamboanga.

June 2008: The Princess of the Stars ferry sails into a typhoon and tips over near the Coast of Sibuyan Island. Of the 850 on board, only 57 survive.

April 2000: The cargo vessel Anahanda, overloaded with passengers, sinks off the southern island of Jolo. About 100 of the estimated 150 people on board die.

September 1998: The Princess of the Orient ferry sinks off Batangas City south of Manila. About 150 die.

October 1988: The Dona Marilyn ferry sinks off the central island of Leyte, leaving more than 250 dead.

December 1987: The Dona Paz ferry collides with an oil tanker off Mindoro Island near Manila, leaving more than 4,300 dead in the world’s worst peacetime shipping disaster.