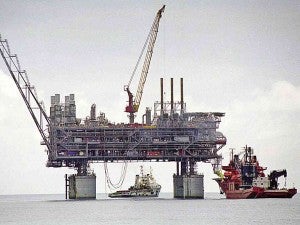 MALAMPAYA PLATFORM This rig draws gas from the Malampaya fields off the coast of western Palawan. Part of the revenue from the gas fields goes to the national government, which uses the money to finance various programs, including P900 million in assistance to victims of Tropical Storms “Ondoy” and “Pepeng” that the Napoles group allegedly diverted to its bank accounts. EDWIN BACASMAS

DAGUPAN CITY—More former and current local officials on Wednesday denied they received assistance from the P900-million Malampaya Fund, further exposing the scope of the bogus-NGO racket allegedly employed by businesswoman Janet Lim-Napoles to siphon off billions of pesos in public funds into her bank accounts over the last 10 years.

In a letter to the Philippine Daily Inquirer Editor in Chief Letty Jimenez-Magsanoc responding to the report “Napoles got mayor’s letters” (PDI, Aug. 4), Estelita M. Aquino, former president of the Tarlac chapter of the League of Municipalities of the Philippines, said she and eight former colleagues in the chapter mentioned in the article did not know Napoles or designer Eddie Baddeo who supposedly asked them for letters of endorsement for the businesswoman’s NGOs.

Aquino said it was “customary” for mayors to ask senators, congressmen and government agencies for financial assistance in developing municipal projects.

But she said she and her former colleagues never asked for funds through Napoles’ NGOs and their municipalities had no records that they had received assistance as shown by supposed documents from those organizations.

They, too, got nothing

Amadeo Perez Jr., head of the Manila Economic and Cultural Office (Meco), which handles relations between the Philippines and Taiwan in the absence of formal diplomatic ties, said he never received anything from the fund when he was mayor of Urdaneta City in Pangasinan from 2007 to 2010, contrary to Commission on Audit (COA) records.

Wilfredo Paraiso, former mayor of Lumban town in Laguna province and, like Perez and the Tarlac mayors, listed among 97 former mayors as having received assistance from the Malampaya Fund, also denied requesting and receiving part of the money intended for the rehabilitation of agrarian communities in Luzon that were devastated by Tropical Storm “Ondoy” and Typhoon “Pepeng” in 2009.

Corroborating the testimony of Merlina Suñas, a former employee of Napoles and one of the six whistle-blowers in the P10-billion pork barrel scam being investigated by the National Bureau of Investigation, Paraiso said his signature in his supposed letter of request for funds was fake.

The NBI is investigating Napoles, who Suñas, Benhur Luy and four other former employees of JLN Corp. claimed in affidavits submitted to investigators was the mastermind behind the pork barrel scam.

Last week, Justice Secretary Leila de Lima announced that the NBI was expanding the investigation to include the Malampaya gas fund scam, which like the pork barrel scandal involved bogus nongovernment organizations allegedly set up by Napoles to divert public funds to her bank accounts.

At least five senators and 23 members of the House of Representatives have been linked to the pork barrel scam.

Napoles has denied any wrongdoing.

“I did not receive anything. I learned about that supposed assistance only when the Commission on Audit wrote me last year,” Perez told the Inquirer by phone. He also wrote to the Inquirer.

Of the 97 mayors on the list of supposed recipients of assistance from the Malampaya Fund, 17 are from Pangasinan, where 14 towns and Perez’s Urdaneta City supposedly got P10 million each. Two other towns, Mapandan and Mangaldan, are listed as having received P7.5 million each.

No knowledge of it

But all of them denied asking for assistance and disowned knowledge of the NGOs that supposedly made the request on their behalf.

Five NGOs that supposedly solicited funds for rehabilitation projects in Pangasinan turned out to be phantom organizations allegedly set up by Napoles.

Perez was supposed to have requested funds through Tanglaw para sa Magsasaka Foundation Inc., which would lead the rehabilitation work in Urdaneta City and in Binmaley and Asingan towns.

Urdaneta was supposed to have received 252 kits composed of various seeds and seedlings, heavy-duty sprayer, bolo with sharpening tools, organized container and agricultural paraphernalia costing P9,943,416 at P39,458 per kit.

Perez said he learned about the supposed assistance when he received a letter from COA Special Audits Office Director Susan Garcia on May 11 last year asking him to authenticate his signature that appeared in several documents submitted by the foundation to support the request for financial assistance.

The documents were a letter of request to Pangandaman for financial assistance and endorsement of the foundation for the implementation of the rehabilitation project, a memorandum of agreement, delivery report, certificate of acceptance, report of disbursement, certificate of project completion and inspection, and acceptance report.

He said he wrote Garcia on Oct. 8 to tell her that his signature in the documents were fake and that the stationery used was not the type used by the Urdaneta government when he was the mayor of the city.

Paraiso had been asked to authenticate his supposed signature in similar documents that had been submitted by the same NGO.

He told the Inquirer that his supposed signatures in those papers were fake and that he had never heard of the NGO or its supposed president, Nova Kay Dulay, until the COA brought the supposed assistance to his attention.

Paraiso could not remember when he had written the COA to disown the request, but said it was sometime after Ondoy.

He acknowledged that Lumban had asked lawmakers for financial assistance, but those requests were for infrastructure projects.

He said it was “unlikely” for mayors to ask legislators for financial assistance through NGOs because they have direct access to the representatives of their districts.

According to documents submitted by the NGO, Paraiso received P7.5 million for Lumban from the Malampaya Fund on Dec. 9, 2009.

Paraiso said he would cooperate with the NBI investigation once summoned for questioning to clear his name and that of the municipality.

Kampitan and Fader could not be contacted for comment on Wednesday.

Quiat said he had also written to the COA to say that his supposed signature in the documents was fake.

He said he sent a specimen of his signature to the COA for comparison.

Quiat, who served from 2001 to 2010 before winning another term in May’s midterm elections, said he, too, would testify when summoned by the NBI.

In Pangasinan, Vice Gov. Jose Ferdinand Calimlim said he did not receive any assistance from the Malampaya gas fund when he was mayor of Mapandan town.

“I did not receive any letter from COA regarding Malampaya Fund. But there was a letter from the Ombudsman asking me if the signatures in the documents shown to me were mine. I said ‘No,’” Calimlim said.

He said he did not know about the Malampaya Fund “until there was this inquiry.”

He said he remembered requesting farm-to-market roads from the DAR but not for a livelihood assistance package.

“I did not endorse any NGO,” Calimlim said.

Former Rosales Mayor Ricardo Revita said his town was supposed to have received P10 million worth of livelihood assistance from GASMFI in two releases in 2009.

“I received nothing. The farmers were used as well as the town of Rosales,” Revita said.

He said documents that bore his forged signature showed that GASMFI delivered to his town livelihood packs for some 100 farmers, each pack costing worth P43,000.

“This was clearly a ghost project. Some of the beneficiaries even included names of those who were already dead,” Revita said.

He said NBI agents were in his town Wednesday to investigate.

“They have in fact talked to the supposed farmer-beneficiaries of the program. The farmers said their signatures were forged,” Revita said.

Emilio Ordinario, 58, could not hide his anger as he spoke about the day he received a letter from the COA asking him if he received farm implements and seeds from GASMFI.

Ordinario, a farmer from Carmay West village, lost his palay and vegetables to floods caused by Pepeng in October 2009.

The COA had informed him that two packages from the GASMFI were delivered to him in November 2009.

“We are just poor farmers. We lost our crops to floods and we had to take out loans so we could replant. Then it turned out our names were used by unscrupulous people to access millions of pesos in gas funds,” Ordinario said.

He showed his PhilHealth card and community tax certificates to prove that his signature in the GASMFI documents was fake.

Another farmer, Benjamin Lumbang, 58, said he was “shocked and became angry” when he received the COA letter.

“I lost my crops and even a daughter to the floods in October 2009. Then we found out our names were used and our signatures were forged so some people could make millions of pesos,” he said.

“We do not know what is Malampaya. We did not see or sign any documents,” Lumbang said.

The two farmers were among the more than 20 residents who were questioned by NBI agents on Wednesday to verify if they received farm packages from the Malampaya Fund.

The list of beneficiaries showed that farmers in Pangasinan supposedly received more than P80,000 worth of farm tools and vegetable seeds.

The packages supposedly came in two batches worth P43,354 each, and were delivered at the same time.

Of the Rosales beneficiaries, two had died long before the supposed date the fund was given to the town, Revita said.

He said he volunteered two weeks ago to submit his statement to the NBI after learning from Inquirer reports that his town received P10 million from the fund when he was the mayor.

“I have requested the NBI to investigate this and to hold accountable whoever had something to do with this,” he said.

Binmaley Mayor Simplicio Rosario, who also denied receiving any assistance from the Malampaya Fund, said he was willing to cooperate with the authorities in investigating the scam.

Rosario said he had submitted an affidavit to the COA Special Audits Office to deny that he signed any document that led to the release of P10-million assistance to his town.

“I have no knowledge of that transaction. Nothing,” Rosario said.

San Quintin Mayor Clark Cecil Tiu said he learned through newspaper reports that his town had received P10 million worth of assistance from the Malampaya Fund.

He added: “I deny everything about that. And if ever there were papers, I’m sure that my signatures were forged.”

He also denied endorsing the NGO Kaupdanan para sa Mangunguma Foundation Inc., which was supposed to have implemented the project in his town and in the towns of Sual, Sta. Maria, San Manuel and Umingan.