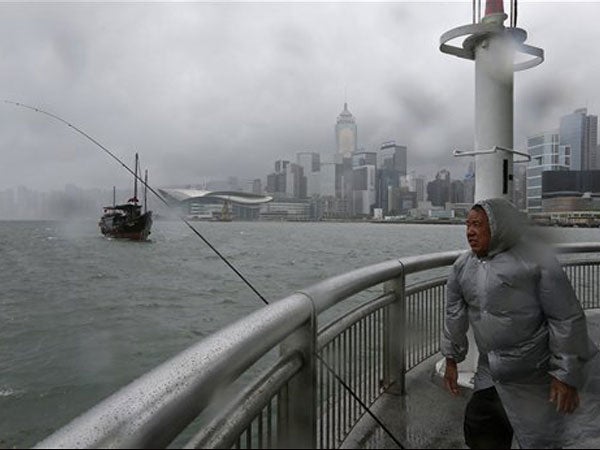 A man battles against a strong wind as he throws a line at Hong Kong’s Victoria Habour Tuesday, Aug. 13, 2013. The Observatory said Typhoon Utor intensified slightly as it moves towards the western coast of Guangdong. The typhoon battered the northern Philippines on Monday, toppling power lines and dumping heavy rain across cities and food-growing plains. AP

HONG KONG – Hong Kong battened down Wednesday as Severe Typhoon Utor forced the closure of the city’s financial market and schools and disrupted hundreds of flights, after leaving six dead in the Philippines.

Gusts of more than 100 kilometres (62 miles) per hour were recorded, with rain lashing down, as the Hong Kong Observatory issued a “Number 8” storm warning — the third highest level.

The Airport Authority said Wednesday 110 flights would be cancelled due to the storm, with another 241 delayed. Ferry services to outlying islands and mainland China were halted, stranding passengers at various terminals.

In one part of town the high winds dislodged a satellite dish, which fell and crashed into a row of motorcycles. Elsewhere trees were blown over, blocking one road.

The city’s streets were noticeably quiet with many workers staying home as businesses and schools were shuttered.

The Hong Kong stock exchange cancelled Wednesday’s session while the observatory said it expected winds to weaken in the afternoon as the storm moves gradually away from Hong Kong.

Utor, which is packing winds of 155 kilometres per hour near its centre, was heading towards the western coast of Guangdong in southeast China, the observatory said.

One 26-year-old woman was taken to hospital as a result of the storm, according to the city’s hospital authority, which said her condition was stable but gave no further details.

Utor is predicted to make landfall on Wednesday night or Thursday morning, according to China’s state news agency Xinhua.

Waves as high as 11 metres (36 feet) were expected in the north of the South China Sea, it reported, with disaster prevention teams requested for the Guangdong area.

The storm earlier swept across the Philippines, flattening houses and causing flash floods and landslides.

The Philippine’s National Disaster Risk Reduction and Management Council said the death toll from the typhoon had risen to six, with five people still missing as rescuers rushed to reach areas isolated by the storm.

Two people were confirmed dead in the central island of Cebu after they were washed away by a flash-flood while two fishermen drowned in the eastern town of Casiguran, the hardest-hit by the storm, the council said.

In the northern Philippines, one man was crushed by a landslide while another man drowned, the council said in a statement.

Almost 42,000 people were still homeless in the Philippines after Utor toppled light structures, ripped the roofs off homes and buildings, and inundated farms, cutting off some towns with landslides and fallen trees, the council said.

As the weather cleared, relief agencies sent workers and supplies to the ravaged towns while heavy equipment was deployed to clear the roads.

Hundreds of people die from the roughly 20 typhoons or tropical storms that strike the Philippines each year.

Utor hit land with wind gusts reaching 200 kilometres (125 miles) an hour early Monday, making it the strongest storm this year, according to the Philippine weather bureau.