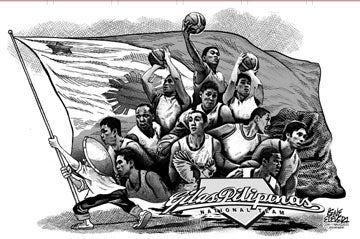 Even the most unenthusiastic towards basketball among us had eyes glued to the screen as the nation’s cagers campaigned Sunday night to take the gold in the Asian basketball championships.

Team Gilas Pilipinas fell short of its targeted top spot but nevertheless gave their compatriots from Batanes to Jolo a generous dose of inspiration for living.

For beyond the fact that their silver finish was historic (never was the Philippines a serious contender for the win for decades) and psychologically monumental (they defeated longtime bane South Korea in route to the finals against Iran), Gilas Pilipinas taught the nation a lesson on the value of discipline, a sense of direction, cooperation and aiming high in the pursuit of a dream.

When Gilas Pilipinas ignored naysayers especially after they lost an early round and focused on playing game by game, they taught each Filipino starting out life somewhere that it is not the critic but the one who does the work, however difficult it may be, who really counts.

In their assertiveness in working as a team in spite of their differing backgrounds and beyond the politics of selecting this year’s lineup of players, they modeled the unity that is sorely needed in our homes, schools, factories, firms, churches and government.

By setting a goal not less than winning in spite of the odds, in the end going home with the silver and tickets to the world championships in Spain. Anyway, the team reminded us that hard work always pays off, though not always in the way we desire.

Gilas Pilipinas’ performance was not just for the big court side crowd or their hard core fans. It is also a message for Filipinos, especially the wandering to find and stay the course to a lofty goal in life.

That could be finding a stable job, seeking ways to get out of being underemployed, finishing school with flying colors, kicking a bad habit and engaging in a socially uplifting one, or simply encouraging a neighbor to be the best that he can be.

There are people who say that all the Philippine team did was to earn a ticket to be trashed in the global basketball arena.

Perhaps it is time they get an optimism check.

These are people who can do nothing but fret who bleed our sportsmen and our motherland at large of the positivity needed to accomplish anything worthwhile.

We salute coach Chot Reyes, mythical five awardee Jayson Castro and the rest of Gilas Pilipinas. It was an amazing run, gentlemen. For your games in Spain, this Asian pueblo amante de basketball wish you the very best.