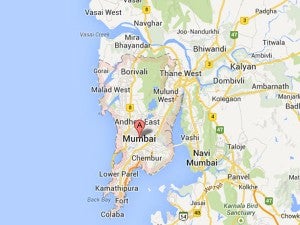 NEW DELHI— An Indian navy submarine with about 18 sailors on board caught fire after an explosion and sunk early Wednesday at its home port in Mumbai.

Efforts were being made to ascertain the safety of the personnel and salvage the diesel- and electricity-powered submarine, navy spokesman Narendra Vispute said.

Indian news channel NDTV said a loud explosion was heard and a huge flame leapt up in the sky. Nearly a dozen fire engines rushed to the dockyard to douse the fire, it said.

After the fire, the sub was submerged at its berth in the naval dockyard with only a portion visible above the surface.

Vispute said the cause of the explosion is being investigated.

The 16-year-old Russian-made submarine, INS Sindhurakshak, had recently returned from Russia after undergoing an overhaul and upgrade, Rahul Bedi, an analyst for the independent Jane’s Information Group, said.

India has 14 diesel-powered submarines, he said.

Last year, India acquired a Russian Nerpa nuclear submarine for its navy on a 10-year lease from Russia at a total cost of nearly $1 billion.

On Saturday, India activated the atomic reactor on its first indigenously designed and built nuclear submarine, which the navy could deploy in the next two years.

India has steadily built up its naval capabilities in recent years, spurred by its rivalry with neighboring China.