Baguio greets day after ‘Labuyo’ with sigh of relief 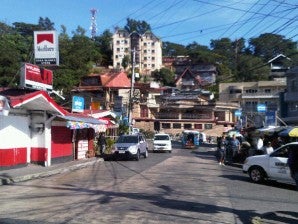 MANILA, Philippines – Everything is back to normal a day after typhoon “Labuyo” pummeled Baguio City with strong rains, said Mayor Mauricio Domogan in an interview with Radyo Inquirer 990AM.

Domogan said classes and government offices resumed on Tuesday, with all access roads to the city open and free of debris.

On Monday morning, the Department of Public Works and Highways temporarily closed Kennon Road because of falling rocks. Ampusongan-Sinipsip, Bokod-Kabayan and Baguio-Nueva Vizcaya roads were also closed due to landslides.

The mayor added that electricity is also back to normal after the city experienced a blackout at the height of the typhoon.

“Typhoon Labuyo passed by our city and left us without any serious damages and without casualties,” Domogan said.

He told Radyo Inquirer they initially monitored a slight increase in the prices of vegetables but added that market prices and deliveries of goods from Baguio have “normalized.”

“There were 96 families (359 persons) who opted for voluntary evacuation but they immediately returned to their houses yesterday,” said Domogan.

Kennon Road closed due to landslides