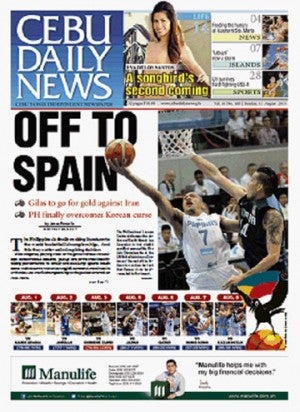 The Philippines is finally making its return to the world basketball championships. And this they achieved in inspiring fashion.

Gilas Pilipinas, playing most of the game without naturalized center Marcus Douthit, put up one of the most breathtaking performances to finally end its slump against South Korea with an 86-79 win in last night’s semi-final match of the 27th Fiba Asia Men’s Championship at the packed SM Mall of Asia Arena.

For a moment it seemed as if the Gilas Pilipinas was headed for another Korean heartbreak but instead turned the game into a historic ending as Jimmy Alapag, Marc Pingris and Ranidel de Ocampo hit crucial baskets down the stretch to complete the victory, the Nationals’ first against South Korea since 1985.

More than making it to the finals of this tournament where it will face the unbeaten and top-seeded Iran, the Philippine team finally succeeded in its ultimate goal of making it to the biggest stage in all of basketball as it booked a slot to the 2014 Fiba World Cup in Spain. There, the Nationals will get to showcase the Filipino game against the best teams from all over the globe.

The last time the Philippines qualified for the Fiba World Cup was in 1986, which was held, ironically, in Madrid, Spain. But the country forfeited its slot in that edition due to political reasons.

Jason Castro led Gilas Pilipinas with 17 points while Pingris had a double-double performance of 16 points and 10 rebounds. Alapag finished with 14 points spiked by four three-pointers while de Ocampo would up with 11.

The Nationals displayed tremendous grit and a huge fighting heart in the face of daunting odds as they weathered the loss of Douthit to injury in the second period and a furious comeback by the Koreans led by Mingoo Kim to pull off the emotional win.

Gilas Pilipinas appeared to be in control of the game as it built a 65-56 lead at the end of the third after trailing, 36-39, at halftime.

Castro, L.A. Tenorio, Japeth Aguilar and Alapag came up with big baskets in that searing run, which they completed without Douthit. The 6-foot-9 center, who plays a vital role in the Gilas Pilipinas’ campaign, reinjured his leg late in the second period and did not return in the match.

The Koreans, responsible for many heartbreakers against the Philippines, came back and were on the verge on handing the Nationals another sorry loss as they erased the deficit behind Mingoo Kim, whose four-point play coupled with a fastbreak basket and a freethrow by Seung Jun Lee put their team ahead, 75-73.

However, Gilas Pilipinas had a date with destiny and Alapag made sure that they would keep it as the 5-foot-8 veteran hit a three-pointer to put the Pinoys in front, 76-75. Korea retaliated with a jumper from Tae Sool Kim but de Ocampo scored on a drive and a three-point bomb to give Gilas Pilipinas an 81-77 lead with 1:31 left on the clock.

The Koreans came to within two after two made freethrows by Donggeun Yang but Alapag delivered a booming three-pointer with 54 seconds that gave the Gilas an 84-79 cushion, time down to 54 seconds.

Korea had another shot to come close but Gabe Norwood snuffed out Mingoo Kim’s three-point attempt and Pingris put a stamp on the win with a putback with 20.7 seconds left.

The win was an emotional one for the Philippiness as it finally ended a string of painful setbacks against South Korea.

The Philippines has not won a high-level basketball game against South Korea since the 1985 Asian Basketball Championship when the Northern Consolidated-backed Philippine team defeated South Korea, 76-72. That team went on to sweep the round-robin championship round for a slot to the worlds.

But since then, it has all been heartbreak for the Philippines against the Koreans.

The Philippine team will battle Iran tonight for the Asian title. Iran advanced after routing Chinese Taipei, 79-50, in the other semifinal pairing.

Korea and Chinese Taipei will duke it out for third place and more importantly, the last ticket to the Fiba World Cup.