Petron sends team to check on reports of oil spill 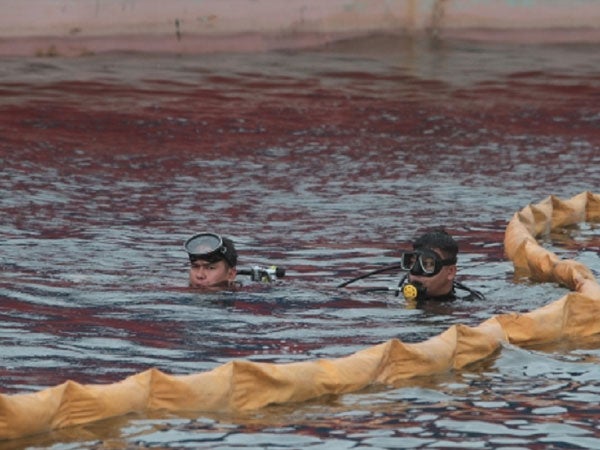 Philippine Coast Guard team check and get samples from the oil spill over the waters of Rosario, Cavite on Friday to the fuel tanker that has affected at least seven villages in the province. INQUIRER PHOTO / NIÑO JESUS ORBETA

“We immediately deployed our oil spill response team to see the extent of the oily sheen and begin containment and recovery operations of what we suspect is diesel,” Petron said in a statement posted in its Facebook page.

“We have also notified the local government of Rosario and the Philippine Coast Guard,” Petron said.

It said the oil spill may have come from M/T Makisig, a vessel owned by a third party contractor, which had earlier unloaded fuel at Petron’s terminal in Rosario, Cavite.

“According to initial information, the leak may have come from the vessel but this will have to be investigated further,” it said.

The fuel tanker is suspected of having dumped half a million litres of diesel into the country’s busiest waterway on Thursday, said Philippine Coast Guard environmental protection chief Commodore Joel Garcia.

Petron said it has checked its receiving pipeline for possible leaks but results showed no leaks.

“To ensure safety and product integrity, we always conduct pressure tests for all our pipelines before we receive any fuel product. This is part of Petron’s standard operating procedures,” it said.

Even then, Petron said that they have deployed manpower and equipment to ensure that the oily sheen “is contained and recovered.”

“We are also conducting our own investigation to see how this happened and to prevent such an occurrence from happening again,” it also said.

The militant fisherfolk group Pambansang Lakas ng Kilusang Mamamalakaya ng Pilipinas on Friday called for the removal of the Petron depot in Rosario.

“The removal of Petron oil depot in Barangay Poblacion is a necessity to avoid such kind of environmental mishap to be repeated again and again with impunity. For the sake of the fisher people and the marine environment, we ask the mayor, the vice-mayor and councilors of Rosario to declare the Petron oil depot,” it said.

An oil spill also affected the waters of Rosario in 2010 after a submarine pipeline of Petron was damaged during the onslaught of Typhoon Basyang.