MANILA, Philippines—A young jihadist group inspired by the al-Qaeda could be behind the spate of bombings in Mindanao, an expert on terrorism told Radyo Inquirer on Friday.

Khilafa Islamiya, a jihadist group based in Lanao del Sur with links to the regional terror network Jemaah Islamiyah (JI), is the probable suspect in a spate of bombings in Mindanao, according to Prof. Rommel Banlaoi, executive director of the Philippine Institute for Peace, Violence and Terrorism Research.

In an interview with Radyo Inquirer 990AM, Banlaoi said his group received information that the Khilafa Islamiyah and the Bangsamoro Islamic Freedom Fighters recently held a joint training on bomb-making with the help of JI-linked individuals. 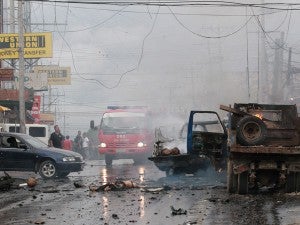 In this picture shows the scene where a car bomb exploded in the southern Philippine city of Cotabato, August 5, 2013. The blast killed five people and wounded dozens. INQUIRER FILE PHOTO

Banlaoi said they are led to believe that the series of blasts in Mindanao are part of the groups’ “after-training missions.”

“Based on our experience, when trainings are held by militants, they later embark on test missions to see if the students learned anything,” he explained.

On July 26, six people were killed in an explosion in Cagayan de Oro City. It was followed by the Cotabato City blast on August 5 which claimed eight lives. Like the first two incidents, the August 7 explosion in North Cotabato has yet to be claimed by any group.

Meanwhile, the BIFF claimed responsibility for a roadside bombing in Maguindanao which injured seven soldiers.

Asked why the Khilafa Islamiyah did not admit responsibility for the bombings, Banlaoi said, “Maybe they still do not want to the public to know about the new group so law enforcement authorities won’t focus on them.”

He said that while the BIFF is pushing for an independent Islamic state in the Philippines, the Khilafa Islamiyah is inspired by the al-Qaeda.

He said there are reports that the BIFF and the Khilafa Islamiyah were trained by JI personalities such as the Singaporean Abdullah Ali, alias Mauwiya, and Malaysian operative Maruwan. The two groups are supposedly working together because of a “convergence of interests on the Islamic cause.”

According to state authorities, the BIFF, a breakaway group of the Moro Islamic Liberation Front, wants to derail the peace process.

He said they have known about the group since last year. He said their research group had long been sharing information with the authorities and private security firms.

Khilafah in Islam means caliphate which refers to an Islamic state representing political unity for the entire Muslim community.