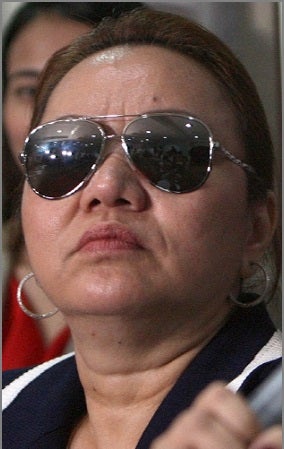 Janet Lim Napoles, the businesswoman tagged in the P10 billion pork barrel scam appeared before the media with her handful of lawyers headed by Atty. Lorna Kapunan at the Rembrant Hotel in Quezon City. INQUIRER FILE PHOTO/ MARIANNE BERMUDEZ

MANILA, Philippines — The savings and loan cooperative of Philippine Air Force personnel invoked on Tuesday, the bank secrecy law amid an allegation by pork barrel scam whistle-blower Benhur Luy that his former employer, Janet Lim-Napoles, controlled P510 million worth of accounts in the thrift unit.

In a statement released to the Philippine Daily Inquirer, the Air Materiel Wing Savings and Loan Association Inc. (AMWSLAI) said:

“Since current banking laws prohibit the disclosure of deposits under Section 6 of RA No. 8367, any information re: subject accounts can only be examined upon the orders of a competent court.

“AMWSLAI would like to assure its members that all transactions are above board and within the confines of the regulations of the Bangko Sentral ng Pilipinas. Further, all  accounts are duly reported as covered transactions in compliance with the reporting requirements of the Anti-Money Laundering Council.”

Colonel Miguel Ernesto Okol, PAF spokesperson, described the cooperative as a “private enterprise run by private individuals,” including retired air force personnel. He stressed that the PAF was not involved in thrift unit.

Luy’s lawyer, Levi Baligod, said he was not surprised with AMSWLAI’s stonewalling because its president and chairman, retired Colonel Ricardo L. Nolasco Jr., had refused to heed the Bangko Central’s order to verify the accounts under the name of Luy and his mother, Gertrudes.

The lawyer said that AMWSLAI in its reply to the letter declared that mother and son were neither depositors nor members. “This is proof that my clients did not earn from this scam. This is part of our gambit to prove the existence of these accounts and test the credibility of our whistleblowers,” said Baligod.

Next, Baligod wrote the BSP  that his clients had executed a waiver of the bank secrecy protection on their AMWSLAI accounts to force the association to confirm the existence of these multi-million peso deposits.  Baligod said the BSP in reply instructed the AMWSLAI to verify the existence of his clients’ accounts “but up to now, AMWSLAI has to make a response.”

Aside from the terse AMWSLAI statement, Nolasco has declined to answer the Inquirer’s question on the alleged Napoles funds  and charges that he has a huge beach resort in Northern Luzon.

Based on the leisure property’s website and several media reports, Nolasco started Hannah’s Beach Resort and Convention Center (named after his daughter) in 2008. Nolasco had originally envisioned the property as a “retirement house” but it has since developed into a world-class facility with 112 villas worth roughly P400 million.

Also on Tuesday, the Inquirer learned about the P30-million placement of the daughter of Agrarian Reform Director Teresita L. Panlilio in the savings and loans association.

Panlilio, one of the subjects of an on-going Ombudsman probe on a P200 million agriculture fund scam involving seven Napoles NGOs in 2007 and 2008, is the mother of Karen Panlilio-Pantoja who, according to Luy, deposited P30 million in  the AMWSLAI on Dec. 6, 2010.

The placement is for three years, or up to December this year, with a tax-free yield of 10 percent annually.

Based on the record of Luy, the trusted but unofficial bookkeeper of the fake NGO empire of Napoles, the Panlilio-Pantoja account has earned a total of P7.5 million in interest as of June this year.

Luy did not explain why Panlilio-Pantoja’s account earned only 10 percent while the rest of the P510 million worth of accounts allegedly controlled by Napoles in the thrift unit were given the standard yield of 13 percent.

The Ombudsman probe also covered Luy and 23 other private individuals who were stockholders of the seven NGOs that received P200 million worth of funds from the Department of Agrarian Reform’s “agri-business development,” “micro-livelihood project ” and “agricultural production.”

The funds were supposed to be released to  farmers in Cagayan, Pangasinan, Cavite, Dinagat Island, Surigao del Norte, Surigao del Sur, Agusan del Norte, and Agusan del Sur but the Ombudsman’s Field Investigation Office found that the taxpayers’ money did not reach their target.

This fund scam is separate from another DAR fund scam in 2009 in which Luy claimed that Pangandaman, Nieto and Napoles allegedly conspired to  funnel P900 million worth of Malampaya fund to a DAR-sponsored livelihood project, which used bogus NGOs as conduits. With a report from Nikko Dizon