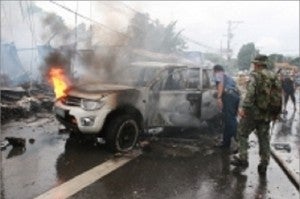 COTABATO CITY, Philippines – From his impoverished riverbank community here, nine-year-old Harris Untong was going to Barangay (village) Awang in Datu Odin Sinsuat, Maguindanao, to participate in a Qur’an reading contest. He did not reach his destination.

Harris was among those killed in the powerful bomb attack here on Monday afternoon.

The boy’s uncle, Sheikh Jaualli Simpal of Poblacion 3 here, said Untong was considered a martyr by most of those who learned of his death.

One Muslim religious leader said he believed that Harris and all the fatalities were martyred because they were murdered on a Ramadan fasting day.

Simpal said Harris was rushed to the Cotabato Regional Medical Center after being seriously wounded in the explosion at a section of the Sinsuat Avenue here. But he died shortly as he was being treated by doctors at the CRMC emergency room, along with Senior Police Officer 3 Mama Manambuay of the Maguindanao Police Office.

To those who knew Harris, he was a “hafiz,” meaning one who recites the Qur’an through singsong melodies of the Book’s rhythmic verses.

His relatives said Harris also participated in a similar nightly contest at the City Plaza, but the one in Awang offered bigger prizes and a variety of food free to contestants and the watching crowd.

The Philippine Daily Inquirer visited Harris’ relatives at a riverside community near Kabuntalan, Maguindanao, which has been flooded by the overflowing Matampay River. It’s an impoverished community where means of livelihood are scarce, according to residents.

Other witnesses said the blast was so powerful that people were thrown off from where they stood.

“I was thrown off as if a very strong wind blew me from behind,” Analiza Campo, 36, who was fetching her child from Episcopal Church Elementary School when the blast occurred some 50 meters away from where she was.

“It was a very loud explosion. The concrete pavement shook. When I turned to see where the blast was I saw black smoke billowing from a burning passenger jeepney and people running away,” Campo recalled.

Stella Solano, 27, a worker of a nearby eatery, agreed.

“It was a deafening explosion, parang sasabog dibdib ko (I felt as if my chest was going to explode),” she said. She later realized that her friend, Ivy Labranila, was wounded by broken glass.

Allan Caruana, 35, a security guard, was wounded by shrapnel after withdrawing money from a Cebuana Lhullier branch and buying medicines, milk and newborn stuffs for his wife Mary Grace, 25, and their firstborn at the CRMC. With reports from Edwin O. Fernandez, Inquirer Mindanao