MANILA, Philippines—Claiming they were implicated by state prosecutors in the 2009 Maguindanao massacre solely on the basis of their last name, two grandsons of former Maguindanao governor Andal Ampatuan Sr renewed their appeal to a Quezon City court to dismiss the 58 counts of murder against them. 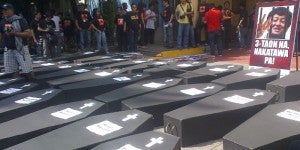 Coffins are lined up at the National Press Club in Manila, symbolizing the death of 58 victims of the Maguindanao massacre on Nov. 23, 2009. INQUIRER.net FILE PHOTO

Another accused asked Judge Jocelyn Solis-Reyes of the Quezon City Regional Trial Court’s Branch 221 to reconsider a July 11 ruling denying his request to be released from detention on grounds he had been mistaken for someone else.

The brothers Anwar Jr, who goes by the alias “Datu Ipi,” and Anwar Sajid, also known as “Datu Ulo,” both surnamed Ampatuan, asked Judge Reyes to reconsider her July 15 order scheduling their arraignment on the multiple murder charges next month, arguing that they could not have taken part in the November 23, 2009 slaughter of 58 persons in Maguindanao.

In their motion for reconsideration, the brothers, through lawyer Emmanuel Brotarlo, claimed that the court made a “serious mistake” in junking their request for the dismissal of the charges against them because state prosecutors had not produced any evidence to support the filing of murder charges against them.

“The panel of investigating prosecutors including the honorable court, with due respect, could not even cite a speck of evidence or any affidavit which were presented in the course of the purported preliminary investigation of the subject cases on the bases of which accused (Ampatuan brothers) were charged with the 57 counts of murder,” they said. The number of counts was eventually raised to 58 after government prosecutors acknowledged a 58th victim whose body was never recovered.

They further argued, “The only evidence, if at all, against both accused during the alleged conduct of preliminary investigations of the subject cases is their surname, which is Ampatuan. In fine, the records of the purported preliminary investigation of the above cases are bereft of any evidence pointing to or implicating accused as among those responsible or who allegedly participated in the alleged Maguindanao massacre.”

The Ampatuan brothers also raised their previous alibi that they could not have been among the perpetrators of the carnage as they were in a Shariff Aguak town council session attending to official functions on the day of the massacre.

They assured the court that their request was made in good faith and was not intended to delay the proceedings.

Meanwhile, in his motion for reconsideration Jun Aliman, who claimed to have been mistakenly arrested as Maguindanao massacre accused Sahid Guiamadel, urged the court to reconsider its denial of his request to be released from detention and to defer his arraignment.

Aliman, through lawyer Omar Yasser Sema, argued that the presumption of regularity in his arrest as Guiamadel had been defeated by the arrest of the “real” Guiamadel by the Sultan Kudarat police.

He claimed that the “real” Guiamadel was arrested on February last year in Barangay Udtong, Lambayong, Sultan Kudarat for illegal possession of firearms and explosives under the name Arnel Bacar Abdullah.

Aliman argued that the court’s ruling that the question of his innocence should be determined in the course of the trial was prejudicial to his rights to liberty and against wrongful arrest and detention, “without any means of recovering for lost time and opportunity,” as well as to his family who has been waiting for his release.

Reyes had set the arraignment of the Ampatuan brothers and Aliman on August 7 at the Quezon City Jail annex.