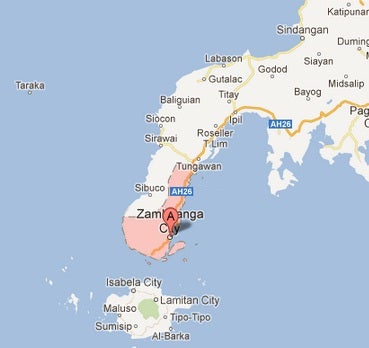 ZAMBOANGA CITY, Philippines – Some residents in the villages of Sta. Maria and Pasonanca here expressed alarm over the display of Bangsamoro streamers, flags and posters outside the homes of alleged members of the Moro National Liberation Front (MNLF).

Sonia Alvarez, a resident of Pasonanca, said they have been hearing rumors that the MNLF members would “declare independence” on Thursday, July 25.

“We don’t want war. We’ve been through that before,” Alvarez said, referring to the Cabatangan incident in November 2001 where more than 60 civilians were taken as hostages by MNLF members.

Senior Supt. Jose Chiquito Malayo, the city police chief, confirmed that “talks are spreading around about the MNLF declaring independence.”

“From whom? That we need to find out,” Malayo said.

“We will continue monitoring and inspecting areas where there are reported hanging of some kind of flags and streamers,” he said.

But Habib Mudjahab Hashim, chair of the MNLF’s Islamic Command Council, denied that their group would declare the independence of a Bangsamoro Republic on July 25.

“This is not true. It is just a propaganda designed to mislead our people and brothers on the ground,” Hashim said.

On July 9, more than a hundred MNLF members marched the streets of Lamitan City in Basilan demanding “independence.” The MNLF members ended their activity an hour later.