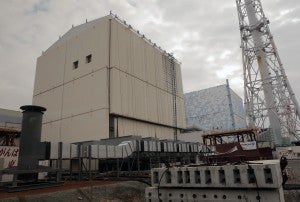 TOKYO – The operator of the crippled Fukushima nuclear plant on Monday admitted for the first time that radioactive groundwater has leaked out to sea, fuelling fears of ocean contamination.

The admission came the day after Japanese voters went to the polls in an election for the upper house, handing the largely pro-nuclear party of Prime Minister Shinzo Abe a handsome majority.

TEPCO did not know the exact reasons for the increased readings but had maintained the toxic groundwater was likely contained at the current location, largely by concrete foundations and steel sheets.

“But now we believe that contaminated water has flown out to the sea,” a TEPCO spokesman said Monday.

However, the spokesman insisted that the impact of the radioactive water on the ocean would be limited.

“Seawater data have shown no abnormal rise in the levels of radioactivity.”

Radioactive substances released by the meltdowns of reactors at the plant in the aftermath of the huge tsunami of March 2011 have made their way into underground water, which usually flows out to sea.

Tens of thousands of people were forced from their homes by the threat of radiation after the tsunami and Fukushima disaster, with some still unable to return.

Although the nuclear accident is not officially recorded as having directly killed anyone, the natural disaster claimed more than 18,000 lives.